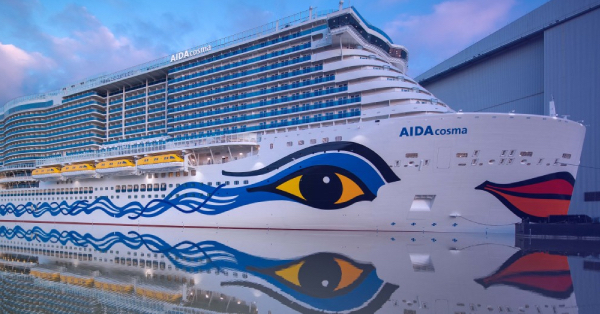 Start of the debut Orient season with many highlights

On November 17, 2022, the cruise ship AIDAcosma called at the new Dubai Harbour Cruise Terminal for the first time. To mark the occasion, numerous official representatives from Dubai Port Authorities, Inchcape Shipping and Dubai Cruise Terminal came on board for the official plaque ceremony. Captain Tommy Möller and General Manager Nicolas Goelen welcomed the guests for the formal event as well as a tour of the ship on AIDAcosma.

The Orient has been a permanent fixture in the AIDA fleet’s program since 2006. Together with aits local partners, the cruise company has built the region into one of the most popular cruise destinations for German vacationers during the winter months. In 2018, Carnival Corporation entered into a strategic partnership with Shamal Holding with the goal of developing Dubai into the region’s premier maritime tourism hub. Part of the agreement between the two companies included the construction of the Dubai Cruise Terminal, the new main hub for Carnival Corporation’s passenger transfer and transit operations in the region. Located in the center of modern Dubai, it is within easy reach of the city’s major attractions – including the Burj Al Arab, Ain Dubai, Bluewaters Island and Palm Jumeirah.

To kick off its Orient premiere season, AIDAcosma staged an exclusive on-board program as if from an Oriental dream from 1001 Nights. On Friday evening, guests could watch a breathtaking AIDA light show of the Ain Dubai live from deck. With a height of 260 meters, the Ain Dubai is the highest and largest Ferris wheel in the world. On November 19, German DJ ALLE FARBEN put on hip beats on board. The superstar from Berlin was already on board as a special act for the christening of AIDAcosma and now once again enthralled the guests with his world-famous hits from the Beach Club stage.

The kick-off event was rounded off, among other things, with sweet delicacies from AIDA gourmet godmother Andrea Schirmaier-Huber, oriental dance workshops by the popular Tatiana Perez and destination-related lectures by Dorine Ali Kahn, who is particularly in touch with the Arabian continent.

Until mid-April 2023, AIDA Cruises will offer the 7-day cruises with AIDAcosma from Dubai. Other destinations on these voyages include Abu Dhabi and fascinating Muscat in Oman. For the first time in the program the island Sir Ban Yas is included on selected voyages, where guests experience the largest natural island of the Arab emirates. The 7-day itineraries also take alternate routes to Bahrain. The kingdom impresses with the dazzling metropolis of Manama and historical sights. The 7-day voyages can also be started from Abu Dhabi and can be combined to 14-day cruises.

Guests of AIDAcosma can look forward to a huge variety of offerings on board. The beautiful Ocean Deck spans four decks and offers all-around panoramic ocean views and an infinity pool at the stern of the ship. The Fun Park with a large indoor playground and the Boulder Wall offer plenty of variety. Summery, light delicacies are served in the new specialty restaurant Beach House. The specialty restaurant Mamma Mia offers homemade pasta and fresh Italian cuisine with on-site service, and the Brauhaus boasts an outdoor grill with a magnificent sea view. In addition, AIDAcosma scores with features also popular on AIDAnova, such as the Beach Club, the Theatrium with its 360° stage, the TV studio and the spacious Body & Soul Organic Spa. Culinary delights await guests in 17 restaurants and 23 bars and cafes.

For the perfect day at sea – the new BAVARIA SR36