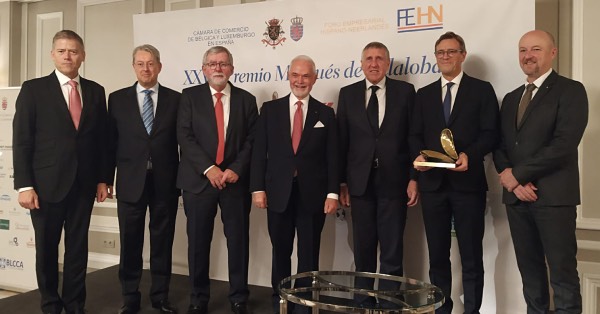 Marc Wengler, CEO of the CFL Group, received the “Prix Marquis de Villalobar” on behalf of the CFL as a recognition of the Group’s contribution, via its subsidiary Lorry-Rail and the intermodal terminal of Bettembourg-Dudelange, to the development of intermodal rail connections between Bettembourg-Dudelange and Barcelona and thus to the reinforcement of the economic links between the two countries.

The 27th edition of the Marquis de Villalobar award was organised by the Belgian-Luxembourg Chamber of Commerce in Spain and the Spanish-Dutch Economic Forum. The award ceremony took place on November 17 in the presence of the Deputy Prime Minister and Minister for Mobility and Public Works of the Grand Duchy of Luxembourg, François Bausch, the Ambassador of Grand Duchy of Luxembourg to Spain, Christian Biever, the President of the Board of Directors of the CFL, Jeannot Waringo, and the President of the Belgian-Luxembourg Chamber of Commerce, Yves Verhamme.

François Bausch: “Today, Luxembourg is proud of the Luxembourgish national railway. This award honors all people who, through their work, contribute to making the railway more attractive as a central link in the mobility chain of tomorrow. Thus, the rail motorway between Luxembourg and Spain is a very good example of more efficient rail freight transport in comparison with road transport.”

Marc Wengler: “I am pleased to accept this award on behalf of the CFL Group employees who have helped grow our freight forwarding services over the past few years. This award is representative of the further development of our international activities starting from our modern intermodal terminal in Bettembourg-Dudelange in the center of Europe. Innovative and competitive freight transport solutions in the field of combined transport, such as the rail motorway, will continue to contribute to the deepening of economic relations between Luxembourg and Spain in the future.”

On the fringes of the award ceremony, a seminar on the theme “Rail motorways, an innovation at the service of the Green Deal” was organised at the headquarters of the Spanish Confederation of Business Organizations (CEOE) in collaboration with the Embassy of the Grand Duchy of Luxembourg in Spain and the Belgian-Luxembourg Chamber of Commerce in Spain and in the presence of Minister François Bausch and the Spanish Secretary of State for Transport, Mobility and the Urban Agenda, Isabel Pardo.

With its subsidiary Lorry-Rail, in which the SCNF and Lohr also hold shares, CFL connects Bettembourg-Dudelange with Le Boulou on the Franco-Spanish border and with Barcelona on a daily basis. From Bettemburg-Dudelange, the CFL Group offers regular intermodal connections connecting in particular Antwerp, Kiel, Rostock and Poznan.