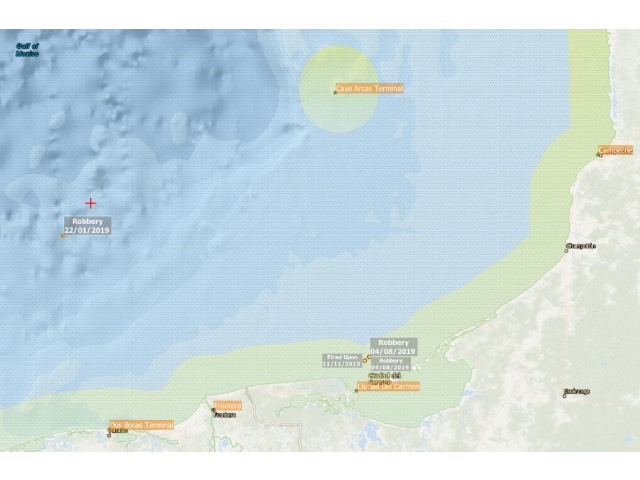 Reporting from the Italian Coastguard has indicates that an Italian flag vessel has been attacked in the Gulf of Mexico, 65nm NW, Puertos Dos Bocas.

This is the first reported incident in the Gulf of Mexico since the attack on the Italian flagged MV REMAS on 11 November 2019. It had a crew of about 35 when the attack occurred off the city of Ciudad del Carmen in the state of Campeche. In that incident, two Italian personnel were injured in the attack, with one being shot in the leg and another concussed.

The details of the latest incident remain unclear.

The Gulf of Mexico continues to be a relatively stable region, despite reports of an increase in offshore criminal activity. International maritime monitoring organisations have recorded four incidents in the previous 12 months targeting tankers and offshore supply vessels. Dryad assesses that there is a significant degree of under-reporting of incidents in the region. Piracy is concentrated in the southern Mexican state of Campeche. Pirates have historically targeted oil rigs and tankers with the intent of robbing personal valuables and items which can be sold on black markets in and around Mexico. Despite the low risk, piracy incidents can be violent, often involving weapons and firearms with a willingness to shoot and intimidate. Despite the recent reporting it is assessed that the Gulf of Mexico continues to present a low risk trading option for commercial vessels.