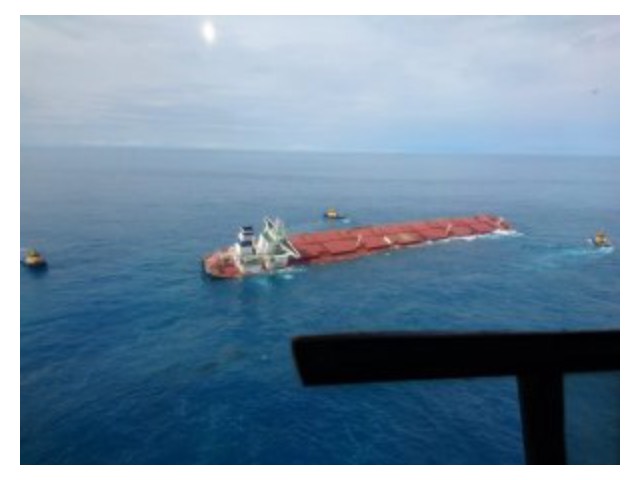 Drainage of saltwater from one of the cargo holds of the grounded cargo ship Stellar Banner has been completed, according to the latest update from the Brazilian Navy.

Salvage company hired for the job Ardent reported that there was no change in the volume of water in the cargo holds.

The activities are part of the salvage and fuel removal operation launched last week.

The giant ore carrier, owned by Polaris Shipping from Korea, ran aground and developed a heavy list on February 24, 2020, some 100 kilometers off the coast of São Luís, in the state of Maranhão, Brazil.

The vessel remains stranded, with an inclination of 24.5º to starboard. The navy claims that according to the surveillance footage from the aircraft monitoring the area the situation remains stable and that there have been no traces of oil at the grounding site.

Brazilian mining company Vale SA is conducting bathymetric surveys and is assessing the capacity to receive the iron ore load at the incident location.

The navy added that precautionary instructions on the coronavirus have also been sent to all the ships involved in the salvage operation.

The navy has assigned 255 military personnel to support the operation. Offshore supply ship Iguatemi and Hydroceanographic Ship Garnier Sampaio, four vessels from the Port of Maranhao and five vessels with oil containment materials on board have also been dispatched to the scene together with a drone with a thermal camera.

Iguatemi is conducting surveys and collecting water samples, monitoring the situation for potential water pollution and controlling the vessel traffic in the area.