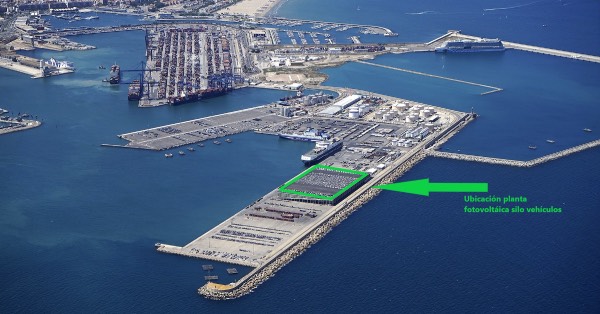 The Port Authority of Valencia awards the contract for the solar plant on the Valencia Terminal Europa vehicle silo in the Port of Valencia.

The Board of Directors of the PAV has approved the award of the contract to the joint venture made up of Lantania S.A.U and Tecmo Instalaciones for 16,060,707.27 euros for the construction and maintenance of this photovoltaic installation.

This plant will generate over 9,000 MWh/year, which represents approximately 11% of the electrical energy consumption of the Port of Valencia.

It is in addition to the project for the Muelle Príncipe Felipe dock which has already been awarded. Between the two installations, 14% of the electrical energy required by the Port of Valencia will be produced.

A percentage which will increase considerably with the forthcoming solar park projects for the Port of Valencia.

This project is financed by the Next Generation funds of the European Union and the Spanish Government’s Recovery, Transformation and Resilience Plan.

A new step by the Port of Valencia in its real commitment to decarbonisation. Third photovoltaic installation awarded in the last three months. First came the one at the Port of Gandia, followed by the solar plant at the Muelle Príncipe Felipe quay in the Port of Valencia and today the one at the Valencia Terminal Europa vehicle depot. Solar energy is already here and joins hydrogen, Liquefied Natural Gas, the railway… and many more initiatives that are already underway.

The Board of Directors of the Port Authority of Valencia (PAV) has approved this morning the award of the construction and maintenance of the solar energy plant to be located on the roof of the vehicle silo of Valencia Terminal Europa in the East dock of the Port of Valencia to the joint venture made up of Lantania S.A.U and Tecmo Instalaciones, Obras y Servicios S.A.

The awarding of the contract, which, being more than 12 million euros, must be approved by the Board of Directors of the APV, amounts to 16,060,707.27 euros including VAT, with a period for the execution of the works of 19 months and 36 months for maintenance.

The solar station will be located on a surface area of 27,700 m2 – equivalent to almost five football fields – on the roof of the terminal operated by the company Grimaldi. The infrastructure will have 10,773 photovoltaic modules installed on a metallic structure inclined at four degrees and facing south. Four transformers will be installed in two transformation centres with two units of 1,250 kilovolt-amperes (kVA) each and another two of 1,600 kVA. This installation will generate around 9,000 MWh/year, which represents approximately 11% of the Port of Valencia’s electrical energy consumption.

This project is financed by the Next Generation funds of the European Union and the Spanish Government’s Recovery, Transformation and Resilience Plan.

This is the second photovoltaic installation awarded by the PAV in the Valencian precinct. The first of these was the one being developed in the Príncipe Felipe dock by the PAVASAL-PAVENER joint venture. This solar park will generate 2,353 MWh/year, equivalent to 3% of the electrical energy. With these two plants, the Port of Valencia will obtain 14% of its electricity consumption.

Valenciaport is also studying new locations for a third photovoltaic plant which would be larger than the two already allocated. The aim is to increase the use of these clean energies with a view to 2030, zero emissions. Thus, in addition to solar energy, progress is also being made in the use of hydrogen, which has already loaded H2 in the hydrogen plant installed on the Xità quay, Liquefied Natural Gas, wind and wave energy.

In this line, it should be remembered that the Port of Gandia has also been awarded the contract for the solar plant to be located in shed 4 on a surface area of 4,500 square metres, with a power output of 990 MWh/year and which will make the Gandia site the first European port to be self-sufficient in energy. The works on this site, which will take 8 months to complete, have already begun, as part of the process of revitalising the Gandia site.

The Port Authority is earmarking 130 million euros in sustainability actions to meet the strategic objective of Valenciaport 2030 zero emissions, which will reduce dependence on fossil fuels and promote energy autonomy. In addition to these solar projects, there are other initiatives such as the location of wind turbines in the Port of Valencia, the construction of two electrical substations to connect the engines of ships docking at the Valencian precinct to the electricity grid, the use of hydrogen in port activity or the commitment to the railway in the ports of Sagunto and Valencia, among other initiatives.