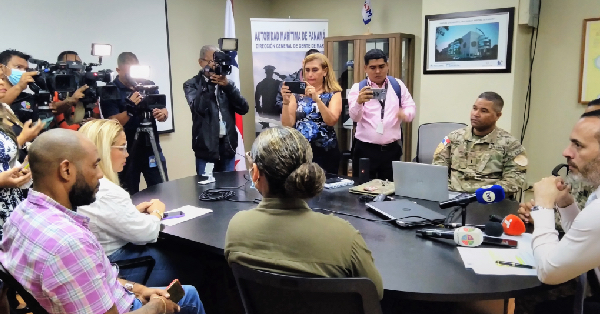 The Panama Maritime Authority (AMP) together with the National Aeronaval Service (SENAN) assisted the relatives of the 3 crew members of the Tanzania Registry tug named “Sea Voyager” that sank on Thursday, January 19, 2023, in jurisdictional waters of the Republic of Colombia, in order to inform them of the latest actions that are carried out regarding the search and rescue of their loved ones.

They were received at the General Directorate of Seafarers (DGGM) of the AMP, the meeting was chaired by the Director of the DGGM, Captain Juan Maltez in the company of the Head of the Maritime Accident Investigation Department of the General Directorate of Merchant Marine (DGMM) of the AMP, Daniel Jaramillo, on behalf of SENAN, the Head of the Search and Rescue Group (SAR), Captain Luis Castillo and the Sea Search specialist, Second Lieutenant Eliecer Castillo, on behalf of the relatives attended, Elsie Cedeño, Victor Manuel Virulet, Diovelis Montero, Kellywen Bello, Belinda Catuy, Luis Castaño, among others.

Captain Maltez during his speech reaffirmed his feelings of solidarity in these difficult moments to the relatives of the crew members and reaffirmed the efforts made by Panama through the AMP, SENAN and the Ministry of Foreign Affairs (MIRE) with the aim of providing all the support available, to the extent permitted by law, to carry out this important humanitarian operation.

It is important to point out that the Panamanian authorities, for border and security reasons, are permanently monitoring, within the waters and jurisdictional airspace that corresponds to it, and once the report of the incident was received on Thursday, January 2023, they redoubled efforts in regards to sea and air patrols routines in the area.

In addition, the maritime safety notice, NAVAREA IV, is still in force, which is issued by satellite, as a warning to merchant ships and includes the necessary information for safe navigation, so that they are alert if there is a vessel adrift or in trouble.

We are in full collaboration with the Colombian maritime authorities, complying with the protocols established for these maritime accidents, which allows us to articulate actions in a coordinated manner. Until now, the reports received daily from the Colombian search department indicate that the search should still be focused on Colombian waters, information that was corroborated by the official spokesman for the operation by the Colombian Navy, Captain of Ships Carlos Urbano, who was contacted virtually and spoke with the relatives, to detail the actions they carry out.

Simultaneously, family members were also assisted so that through the Microsoft Teams platform they participated in the First Public Information Meeting since the accident occurred, to publicize the investigation processes managed by the General Maritime Directorate of Colombia (DIMAR ).

At the request of the relatives, a note was sent to the Authorities of the General Congress of the Guna Yala Region, requesting their cooperation, so that they notify the community that the crew members are still missing.

The authorities stressed to the relatives that both countries, the Republic of Panama and the Republic of Colombia, remain in their search efforts, within their bordering areas and the willingness to provide all the necessary support to the missing crew members, in the same way. In this way, the AMP has maintained and maintains an open door policy, always giving priority to seafarers and their families.