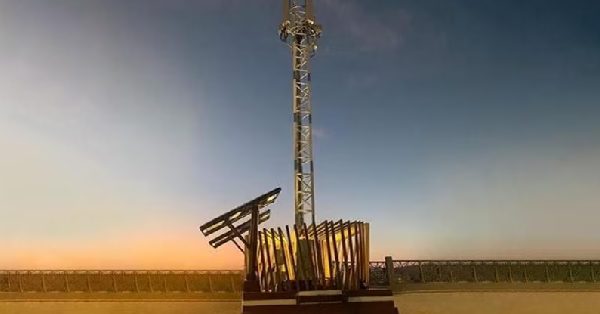 Through this cooperation, Telecom Egypt becomes the first operator in Africa to install this green tower. The material used for building the tower emits less CO2 than steel, the alternative. Highly resistant to wind and high temperatures, the tower is approximately 18m high, with a special camouflage fence made of environmentally friendly materials. It supports wireless network antennas and radio units featuring the latest energy-saving technologies and partially powered by solar cells.

The Managing Director and CEO of Telecom Egypt, Adel Hamed, said that the implementation of this type of mobile site in Egypt is unprecedented. It underscores the efforts of all those in charge of the project, and their ability to implement the entire site in a timely and systematic manner, as per the highest international green quality standards.

These new technologies also contribute to improving the signal quality by about 20%, compared to regular antennas, this means that fewer base stations need to be installed resulting in a lower environmental footprint and an additional step towards environmental sustainability, Hamed added.

Jim Liu, CEO of Huawei Egypt confirmed that the company is focused on developing the infrastructure of Information and Communication Technology in Egypt. That is why Huawei has joined hands with Telecom Egypt, one of the largest telecommunications companies in Egypt and the Middle East.

Liu added that Huawei is keen to provide suites of innovative technologies to save energy in order to build a sustainable low-carbon future. He also pointed out that recent studies show that FRP poles produce 43% less carbon dioxide emissions, compared to steel, and also reduce end-to-end energy consumption by nearly half during manufacturing and shipping.

Liu also explained that energy solutions for green sites depend on passive cooling, which eliminates the need for air conditioning, and thus leads to a 47% reduction in energy consumption compared to sites with equipment rooms. Finally, Liu noted that the site is fitted with solar panels providing about 2 kilowatts, leading to an additional 20% reduction in carbon dioxide emissions.