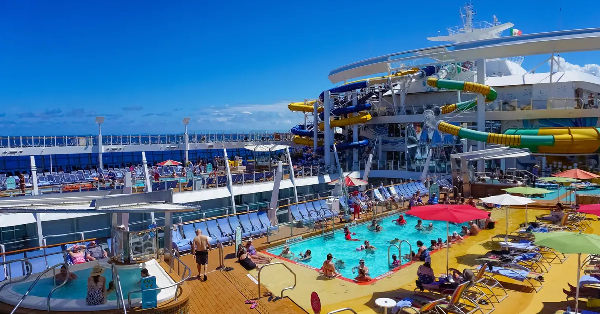 If you’re between the age of 18 and 25, there’s now more activities for you to do on a Royal Caribbean cruise ship than before.

Royal Caribbean has quietly unveiled a new activities program aimed at an age group that has traditionally found itself on the periphery of things to do on a cruise ship.

The new activities are referred to as the Hyperlink program, and they aim to bridge cruise ship activities following the teen club age to the more common adult offerings.

“We have been doing we’ve been doing a trial on the Symphony of the Seas of what we’re calling the Hyperlink program, which is going to be a new program for the 18 to 25 year olds. So we’re doing that right now and it’s coming.”

Since then, the program has been spotted in the Cruise Compass of other ships across the fleet, including Odyssey of the Seas and Wonder of the Seas.

It’s not clear yet which ships offer it or not.

For many young adults on a cruise, they see a gap in programming that appeals to them once they are too old for the teen club.

Royal Caribbean limits the teen club to passengers 17 years and younger, which means anyone between the age of 18-20 is found in a middle ground of being too old for the teen club, but not old enough to drink.

In looking through the Royal Caribbean app, we can see examples of the events the Hyperlink program includes.

Similar to the teen events, there are now special events listed that cater only to guests between the age of 18-25.

It appears the goal is to gather passengers of this age so they can meet and spend time together with the intention of fostering new friendships.

Just like other events, there’s no pre-registration needed. Guests of this age can simply show up at the selected time and location.

Royal Caribbean’s activities staff curate the event, just like other events onboard.

There are an estimated 80 million millennials in the United States, making them the largest generation currently.

The Hyperlink program is aimed at guests at the younger end of the spectrum, as the millennial generation spans anyone born between 1980 and 2000.

An estimated 32% of millennials have already taken a cruise in the last five years, and Millennials seem to like the idea that cruises are transportation and accommodation in one. The appeal of leaving your bags unpacked the entire trip has caught on, and cruise lines are highlighting this as they expand their offerings.

While millennials may not make up the majority of cruise passengers right now, getting them on board will become increasingly more important as they get older.