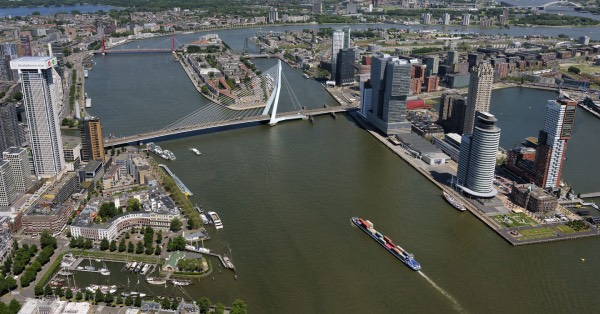 The Ukraine war has resulted in several countries imposing sanctions on Russia. The latest, eighth round of sanctions adopted by the European Council on 22 October imposed a price cap on crude oil from Russia and prohibits the import of steel, steel products, machines and certain chemical agents. Previously, the EU imposed a ban on the import of Russian oil and petroleum products.

These energy products are subject to a transition period. For crude oil, this period of transition ends on 5 December 2022, while for petroleum products, it will end on 5 February 2023. Shipping companies had already significantly reduced the number of containers they ship to and from Russia due to the war and the resulting sanctions

62 million tonnes of the almost 470 million tonnes of transhipment in the port of Rotterdam is Russia-oriented (13%) (source: CBS). Many energy carriers are imported from Russia via the port of Rotterdam. Roughly speaking, 30% of crude oil comes from Russia, 25% of LNG and coal and 20% of oil products. Russia exports products such as steel, copper, aluminium and nickel through Rotterdam.

The measures included in the eighth sanction package announced by the European Union on 22 October 2022 entered into effect on that date. Among other things, the Round-8 sanctions include:

Previous rounds of sanctions governed things such as a ban on vessels registered under the Russian flag entering ports on the territory of the European Union (1) and a ban on the import of raw materials.

For instance, Rounds 5 and 6 of the sanctions comprised:

The fifth round of sanctions includes several derogations for certain types of cargo. In other words, vessels sailing under the Russian flag that come under the terms of the derogations may still be granted entry to European ports. On top of this package of sanctions, the European Union has published a list of natural persons and entities who are subject to restrictions. Several vessels are included in this list. Certain derogations apply to these vessels.

The sea captain, agent, shipping company and owner of the cargo of any Russian vessel must seek to determine whether any derogations apply to the vessel or its cargo, on the grounds of which the vessel may be granted entry to a port. The Harbour Master will continue to be responsible for the implementation of the port’s entry policy.