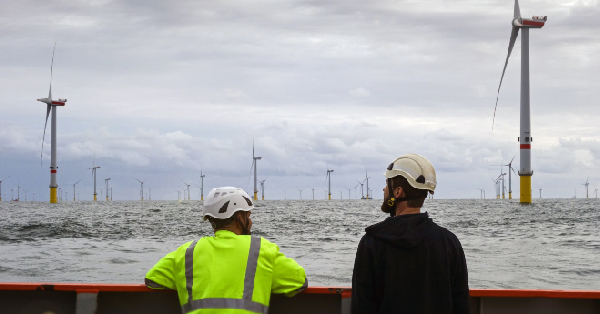 Offshore wind energy is the generation of electricity through wind farms in water, usually at sea, where wind reaches a higher and more constant speed than on land. Thus, offshore farms can generate more electricity and have less impact on people, animals and the landscape.

Greece, a country with remarkable wind resources, currently has 4.5 GW of installed onshore wind capacity. It has immense potential for offshore wind energy produced by both fixed-bottom and floating technology.

Earlier this year, the Ministry of Environment and Energy of Greece created a high-level plan and new law on the development of offshore wind power in the country. These were approved by the Greek parliament in July 2022.

The European Bank for Reconstruction and Development (EBRD) supported the ministry throughout the process, providing technical assistance on the legal and regulatory framework for offshore wind energy development.

“The new law is a milestone for Greece’s energy sector, as it can help the country capitalise on its unique offshore wind energy sources and become carbon neutral by 2050,” says George Gkiaouris, EBRD Regional Head for Energy in South East Europe.

The law will promote competitiveness through an auctioning system, fostering cost efficiency and the development of innovative technologies, including fixed-bottom and floating offshore wind.

“The Offshore Wind Framework we adopted, with the EBRD’s invaluable assistance, ensures transparency and competitiveness,” says Alexandra Sdoukou, Secretary General for Energy and Mineral Resources at the Ministry of Environment and Energy of Greece. “Moreover, our approach significantly de-risks investment, both legally and financially, in order to provide a solid foundation for international developers and investors.”

Greece’s National Energy and Climate Plan (NECP) envisages a total of 7 GW of onshore wind energy by 2030. That target is expected to increase substantially once the current revision of the NECP has been completed. The Greek government has also committed to an additional 2 GW of offshore wind capacity by that time. This could play a key role in supplying clean and reliable energy to the mainland, as well as the Greek islands.

“The sectoral development envisaged in the high-level plan takes into account the country’s topography and considers the process of interconnection of new offshore plants and islands in an effort to maximise benefits and minimise costs,” says George Gkiaouris. “The plan also sets out mechanisms to ensure that offshore wind power is beneficial to local communities.”

In the coming months, the Greek government will adopt a series of decrees setting out processes such as site selection, spatial planning and licensing/permitting.

“Having completed the first step by adopting the Offshore Wind Law, we will move rapidly forward with the next steps in the coming months: the adoption of a National Programme for the Development of Offshore Wind and the selection of the first sites to be auctioned,” says Alexandra Sdoukou.

According to the International Renewable Energy Agency, onshore and offshore wind could generate more than one-third of Greece’s total electricity needs and become the country’s prominent generation source by 2050. It estimates that the global cumulative installed capacity of offshore wind power will increase almost ten-fold to 228 GW by 2030, with total offshore installation nearing 1,000 GW by 2050.