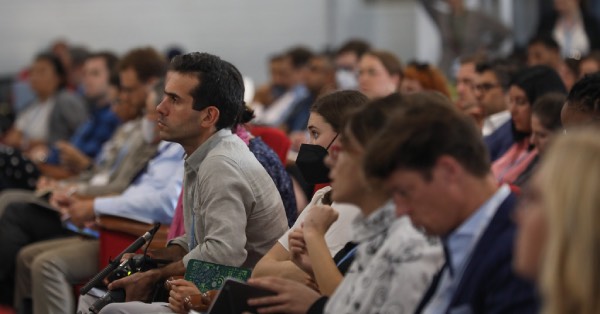 Shipping is omitted from the Paris treaty which forms the bedrock of the COP27 agenda, but maritime decarbonisation has risen to become a prominent topic. This year, outright surprises have been few and far between for the maritime sector, but there have been developments worthy of a closer look.

Sources claim that as many as 400 private jets descended on Sharm El-Sheik to bring some of the 35,000 delegates to the UN COP27 conference, where the international community has reconvened to chip away at finding global consensus on climate action.

Delegates from nearly 200 countries are attending the two-week conference which runs until Friday 18th November. While the UN has been keen to highlight the inclusivity this suggests, the conference has been criticised for the sharp increase in fossil fuel lobbyists attending.

Staunch campaigner Greta Thunberg snubbed the conference, accusing organisers of “greenwashing”. Perhaps believing the coast was clear, UK Prime Minister Rishi Sunak u-turned on his plan not to attend (albeit for different reasons), arriving to be met by ex-UK PM Boris Johnson. Johnson, who was recently unseated by a Sunak-led cabinet revolt, was there to deliver a speech on “corrosive cynicism” and its effect on global climate action.

This will be the last COP conference before the IMO convenes in the Spring to finalise their GHG strategy. Attempting to align shipping with the goal of limiting global warming to 1.5℃ over reference levels by 2050, policy makers will be looking at the discord at COP for clues on the feasibility of their own GHG agenda.

The first is a series of declarations by governments, ports, and shipping companies describing their commitments to the green transition in maritime. Organisers, the United States and Norway, launched the ‘Green Shipping Challenge’ back in May. In response, 40 commitments were shared by maritime stakeholders on the opening day of the conference. Many are repeats of commitments announced at COP26 last year and many are light on detail. However, the list was not entirely without note.

A.P.Moller-Maersk signed a collaboration protocol with the Spanish Government to explore the feasibility of large-scale green fuel production in the Andalucian and Galician regions of Spain. If implemented, the scheme could produce up to 2mn tonnes of green hydrogen per year and provide up to 85,000 jobs over the course of the project.

In a press release, Maersk CEO Soren Skou said: “We are very pleased to explore green fuel opportunities with the Spanish Government, as the country holds key characteristics to help solve this challenge with its great hydrogen ambitions and aspiring sustainability goals. Spain encompasses significant renewable resources and is placed along key shipping routes.”

This latest development from Maersk comes just months after announcing their seventh strategic partnership on green methanol with Chinese bioenergy firm Debo. This string of announcements suggests that Maersk is acting decisively to entrench their maritime dominance, leveraging recent positive cash flow to take positions in future fuels production, infrastructure, and supply. This comes on top of several moves to enter other parts of the logistics chain such as airfreight, trucking, warehousing, and last-mile delivery.

Noted for participating in a ‘clash of the titans’ with Maersk in recent years, Amazon underlined the shift in attitudes on the demand side by citing a series of signals from cargo owners demanding zero emission shipping. The retail behemoth has already launched two activist partnerships – the First Movers Coalition and Cargo Owners for Zero Emission Vessels (coZEV), both of which apply pressure to the ocean freight sector to decarbonise at pace. Amazon has recently taken a stake in bio-based fuel service, Infinium, which manufactures bio diesel for its haulage business. This deal is just one part of Amazon’s $2bn climate fund which has helped the firm to become the biggest corporate investor in renewable energy, operating 274 renewable projects globally.

However, the biggest private sector investment announced at COP27 came from DP World. The ports and terminals giant used the Green Shipping Challenge to declare that it’s committed $500mn for use across its business to eliminate up to 700,000 tonnes of CO2 over the next five years.  A slew of measures was announced via video link from Chairman and Group CEO Sultan Ahmed Bin Sulayem, who said: “As a leading enabler of global trade, we have the tools, ingenuity and drive to lead a step change in logistics.” The company intends to make the reduction, equal to 20% of their 2021 emissions, by switching from diesel to electric assets, investing in renewable power, and exploring alternative fuels.

Green shipping corridor schemes are also featured in the challenge. First announced under the Clydebank Declaration at COP26, green corridors have continued to gather momentum this year. New corridor schemes were announced between Australia and Singapore; Belgium and Sweden; the US and Canada, South Korea, Singapore, and China; and the UK and Norway. The Maersk Mc-Kinney Moller center for Zero Carbon Shipping released a summary blueprint for green corridors which is due for full release in December. ABS also released a report which sets out a regulatory framework for green corridor adoption.

The other notable conference development concerned the role played by 1.9 million seafarers in the maritime energy transition. A joint report released by the UN Global Compact, International Chamber of Shipping (ICS), and International Transport Workers’ Federation (ITF), discusses the importance of preparing the seafaring workforce to adapt to change.

Commissioned by the Maritime Just Transition Task Force which was set up at COP26, the report highlights the importance of considering the needs of seafarers when adapting to achieve emissions reductions targets.

The authors propose a 10-point action plan, grouped into skills and training, recruitment and attrition, and what they describe as ‘fundamental just transition principles’. These principles include: a requirement to align decarbonisation plans with global labour standards such as MLC (2006); championing diversity, equality, and inclusion on board ships to drive better performance; and ensuring health and safety is properly considered throughout.

The report predicts a steep rise in training requirements for seafarers adapting to alternative fuel vessels. The most pessimistic scenario on alternative fuel adoption predicts that over 300,000 seafarers will need re-training by 2050. This rises to nearly 1.8 million if the industry is to meet current decarbonisation targets.

At the opening of COP27, UN Secretary General Antonio Guterres told the world that: “We are on a highway to climate hell with our foot on the accelerator. Our planet is fast approaching tipping points that will make climate chaos irreversible.”

However, there is a yawning gap between highlighting the need to take climate action and bringing about the technology, skills, and infrastructure to execute on it. Taking action in shipping requires a paradigm shift away from the comfort of well-worn technology and the certainty of mature market dynamics. Oil-burning combustion engines so familiar to ship owners and crew are to be replaced by embryonic greener alternatives that require as-yet unobtainable fuels. Classification societies still point to a degree of crystal-gazing when it comes to advising owners and operators on new build propulsion strategies.

Meanwhile, the demands mount up. Ship finance, cargo owners, and even the fossil fuels industry point fingers at shipping and insist that it makes up its mind and transitions more quickly. The truth is, COP27 may be oversubscribed with self-interested lobbyists and oil majors, but the world either moves forward as one, or fractures into chaos.

The global population cannot afford ships to remain at anchor while dependence on oil is demolished. The oil industry will require continued investment during the transition to keep lifeblood economies moving, and conflicted geopolitical interests one step back from the brink of self-assured destruction. The energy sector also has the critical expertise and resources needed to scale green energy sources in time to make a difference.

After 27 years of discussion at COP, the needle has moved, but not a great deal. As Rishi Sunak pointed out in his COP27 address: “When [Britain] began [its] COP presidency, just one-third of the global economy was signed up to net-zero. Today, it is ninety-percent.”  But there is little doubt that, as Greta Thunberg has suggested, talk is cheap and time is short.