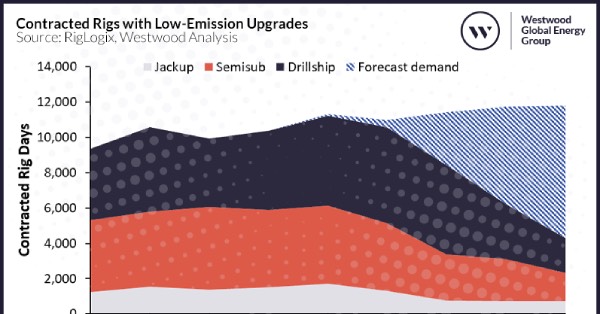 The energy crisis that has arisen during 2022 and the mounting importance of energy security has reinforced that the exploration for and production of oil and gas will likely continue to play an essential part of the energy mix over the coming decades.

2022 has brought with it a continued increase in jackup, semisubmersible (semi) and drillship demand, utilisation, and dayrates, which have all reached highs not witnessed since 2014, and Westwood anticipates further increases through to 2026. This means that emissions from the offshore drilling fleet, if unimpeded, will rise as more units are put to work.

Drilling contractors recognise that they must continue to do their job but in the most efficient and environmentally responsible way possible, in a bid to align with the Paris Agreement, to reach their own climate targets and to be more sustainable long term. Some are at the beginning of their emissions reduction journeys, while others have been working on emission-reducing technologies, projects, and studies for several years

Analysis from Westwood’s Offshore Rigs and the Energy Transition special market report, shows that most of the current upgraded fleet have healthy backlogs and are being fixed at dayrate premiums when compared with standard counterparts. Meanwhile, there are currently only two “eco” designed semisubs currently under construction and two drillships in shipyards with green credentials, one of which has work in place and the other is being actively marketed.​

In terms of adoption of low-emission retrofitted rigs, the majority are being put to work in the North Sea, with usage in Norway especially high due to carbon taxation, regulations as well as incentivisation. Meanwhile, such rigs are also contracted in the US Gulf of Mexico and South America, and some have been or are planned to operate off Africa, the Mediterranean and Australasia too. ​

A variety of efforts are being undertaken by drilling contractors in a bid to meet their targets and reduce their carbon footprints. Such measures include (but are not limited to), upgrading rigs with energy efficiency and emission tracking systems as well as fuel, energy and emissions analytics software, undertaking trials of alternative fuels as well as adopting the use of fuel additives, securing “eco” notations for rigs from DNV GL and ABS and integrating energy managements systems such as DNV’s ISO 50001 into their fleets.

Of course, a lot of emphasis is also given to various measures that can be undertaken to reduce the amount of time taken to drill a well, as a particularly efficient way of cutting emissions during a campaign. In addition, most drilling contractors are also implementing training of crews for engine management performance as well as incentives for emissions awareness and reductions.

Their clients, the operators, also have ambitious climate targets to meet and several are now using upgraded low-emission rigs or partnering with drilling contractors on emission reduction efforts during drilling campaigns, in a bid to reduce their own Scope 1 emissions.

Equinor is leading the way in terms of contracting upgraded rigs, which is not surprising considering most of its operations are based in Norway. The operator has an ambitious target to reduce Scope 1 GHG emissions from drilling rigs and floatels and Scope 3 emissions from vessels contracted – 50% by 2030 (2005 baseline) offshore Norway and 50% by 2050 (2008 baseline) globally. Shell, Chevron, Aker BP and Petrobras are also in the top five users of these rigs.

There are various challenges surrounding this topic which has led to slow progress and limited adoption of low-emission rigs for offshore campaigns. Challenges include high investment costs of new technologies coupled with a rig market downturn that lasted around six years, lack of government funding, supportive legislation and regulation, accessibility and availability of alternative fuels and lack of incentivisation from operators outside of Norway.

This does not mean that there are not opportunities to be found, however. Some operators are offering emission-lowering bonus incentives on rig contracts, meanwhile assets with emission-reducing upgrades earn higher dayrates on average than non-upgraded counterparts. Increasingly, rig tender documents are asking for emissions information, and drilling contractors that can offer proven “eco” credentials will have a competitive advantage.