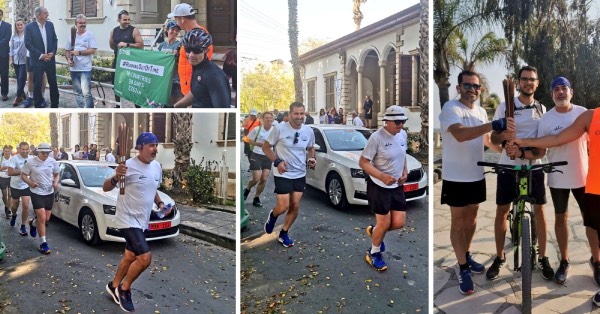 The Cyprus Shipping Chamber participated at the Global Relay Race “Running Out of Time”, which was coordinated in Cyprus by the Cyprus Marine Environment Protection Association (CYMEPA), as part of their celebrations for their 30th Year Anniversary, on 31 October 2022, in Limassol.

“Running Out of Time” is a 7,767km non-stop relay which started from Glasgow, Scotland on 30 September 2022 (host country of COP26) and will end at Sharm El-Sheikh, Egypt (host country of COP27). There are a total of 732 stages, with each stage being around 10km long. The relay will run day and night for 38 days and will travel to 18 countries to deliver a climate action message to the decision makers at COP27.

The Chamber as the representative of the Cyprus Shipping Industry, joined this commendable “green” initiative, giving a strong message that the green transformation of the maritime sector is a top priority for the Industry but also that Shipping’s successful and safe transition to an even “greener era” call for a mixture of synergies among the public and private sector, academia and for private and public funding, in order to facilitate investment in developing the required green Shipping technologies and fuels.

Chamber’s representatives participated at the relay race in two different routes completing a total of 20 km. The Chamber’s Director General, Mr. Thomas A. Kazakos, ran first for 10 km from CYMEPA’s office ending at Aphrodite Beach at Agios Tychonas, transferring together with the Shipping Minister, Mr. Vassilios Demetriades, the President of Cymepa, Mr. George Tsavliris and other runners the baton to the Chamber’s Marine Officer, Mr. Chrysostomos Efthymiou, who cycled a route of 10km ending at Pentakomo and gave the baton to the next team of runners who will take it to Larnaca and next to Israel.