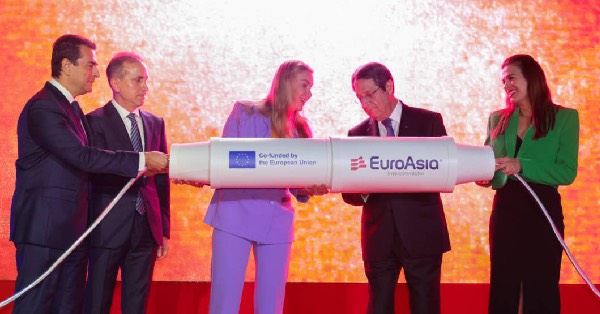 I could only characterize this day as historic, since, after years of deliberations and hard work, we are now in a position to proceed with the construction phase of the “EuroAsia Interconnector”, an emblematic project of great geopolitical, strategic and national importance.

A project which will connect the Cypriot, Greek and Israeli power grids through the world’s longest submarine power cable which will total over one thousand two hundred kilometres, with a two-thousand Megawatt capability.

The construction of the electricity interconnection is expected to be completed by the end of 2027, since the project promoter has secured all the relevant permits and binding offers from the world’s leading manufacturers in the energy field: Siemens and Nexans. Commissioning is expected to follow in the first half of 2028.

All efforts made over the last few years to implement this project are truly remarkable and make us feel proud. The steps taken as a result of the full cooperation of the government with the Project Promoter EuroAsia Interconnector Limited have put the project on track for implementation.

A project that will lead Cyprus to the path of a new energy era, since, apart from ending our energy isolation – being in fact the last non-interconnected member state of the EU– it will create strong perspectives both for the development of the economy and the broader progress of the country and its citizens, through:

–          Promoting competition in the electricity market; and

–          Achieving environmental and energy objectives towards a more competitive, sustainable and greener economy.

Benefits which are obviously also extended to the countries involved in the ‘EuroAsia Interconnector”.

The realization of the project “EuroAsia Interconnector” constitutes not only a historic milestone for our country, but for Europe itself, since it will connect the old Continent with the Middle East.

That is why it has received the universal support of all European Institutions, being chosen as a Project of Common Interest, with the EU earmarking six hundred and fifty seven million euros for its construction through the “Connecting Europe Facility” mechanism; the largest grant that has ever been provided by the said mechanism.

This is a testament of the Project’s importance and high added-value in:

–          Contributing to the EU’s climate and energy goals by integrating renewables;

–          Increasing competition on energy markets by offering alternatives to consumers; and

–          Contributing to the EU target for electricity interconnection between member states by 2030.

In addition to the aforementioned grant, it is also worth mentioning that the Council of Ministers of Cyprus has approved, in a landmark decision, the allocation of a one hundred million euros grant to the EuroAsia Interconnector through the Cyprus’ Recovery and Resilience Plan.

I have left for last an equally important aspect of the “EuroAsia Interconnector”. The fact that it constitutes a tangible proof of the benefits of the trilateral and multilateral mechanisms of co-operation we have established, with the aim of promoting stability, peace and prosperity in our volatile region.

Having worked hard over the past few years to build concrete energy partnerships in the region, Cyprus and our neighboring countries, as the East Mediterranean Gas Forum held this morning verified, are of the strong view that we can significantly help the EU in its efforts to establishing reliable alternative energy corridors.

Through coordinated and collective action, we are confident that we can create in effect an East Med Energy Corridor by expediting mature projects and moving forward with the realization of the synergies required for viably exploiting both our indigenous hydrocarbon and renewable resources.

Projects such as the Eurasian Interconnector and the EuroAfrica Interconnector between Cyprus, Greece and Egypt fit very well into this discourse both for their substance, but also for their strategic value in energy provision and security from the Eastern Mediterranean to continental Europe.

All of the countries involved are committed to making these key infrastructure projects a reality. We have, thus, all agreed upon bilateral and trilateral Memoranda of Understanding, which map out the next steps in implementing the emerging Eastern Mediterranean Energy Corridor.

In conclusion, please allow me to express on behalf of all Cypriots, our sincere gratitude and appreciation to the EU Energy Commissioner, Ms. Kadri Simson, for her continuous and strong personal support for the project.

Her priceless commitment has always been of great significance for the realization of the “EuroAsia Interconnector”.

I would also like to express my sincere appreciation to the Governments of Greece and Israel for the excellent cooperation we have had all these years and especially to the Energy Ministers of Greece, Mr. Kostas Skrekas, and the Energy Minister of Israel, Ms. Karine Elharrar, for their invaluable contribution for the implementation of the project.

I would also like to congratulate the Ministry of Energy, Commerce, and Industry, and the Minister, as well all the Ministries involved in the permitting procedure of the project, the Cyprus Energy Regulatory Authority, the Transmission System Operator, and particularly the Project Promoter, Mr. Ktorides, for their hard work and sincere cooperation which has brought us to the launch of the construction phase of the project.

I wish every success to the efforts for realizing the vision.