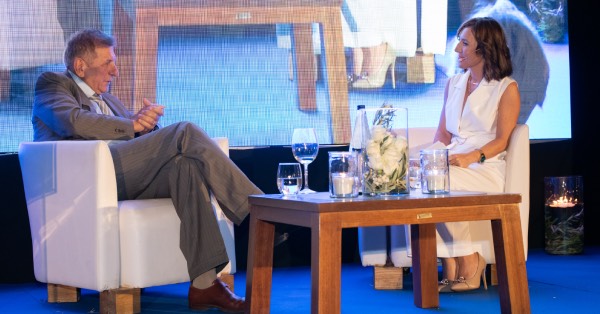 On Friday, 7th October 2022, the Cyprus Marine Club (CMC) marked its participation in the Maritime Cyprus  for the first time by hosting an interview with the President of the Cyprus Union of Shipowners (CUS) , Mr. Andreas Hadjiyiannis.

The interview,  followed  by five  – course dinner took  place at the Gazebo Mare in Limassol Marina.

Mr. Andreas Hadjiyiannis is a self made shipowner and the founder of Cyprus Sea Lines Co. Ltd. , Cyprus Maritime Co. Ltd., and Hellenic Tankers Co. Ltd.  All three companies are privately owned and they have traded over 400 ships and at present their combined fleet of tankers, bulk carriers and containers consists of over 60 ships, well over 6 m DWT.

President of Cyprus Marine Club, Captain Eberhard Koch, in his opening statement, shared his contentment about the high number of guests considering how socially Maritime days have started. The event was attended by H. E. Deputy Shipping Ministry to the President, Mr. Vassilios Demetriades, H.E. Acting Permanent Secretary, Mrs. Liana Charalambous – Tanou, Executive Committee and Members of CUS as well as CMC.

Capt. Koch has welcomed 5 new Individual Members of the Club which now counts 144 members in total.

Mrs. Paczkowska started her interview with brief introduction of the special guest  and shortly after,  challenged him with two dozens  of insightful and penetrating questions.

The interview focused on the importance of Greek and  European Shipping industry being the geostrategic asset to the European Union in the face of the global challenges, CUS mission and vision and the role it is playing in Cyprus and Europe. The discussion further focused on the Importance of Limassol as the international shipping hub and environmental issues.  Mr. A. Hadjiyiannis had the opportunity to present to the audience his personal views on the regulations affecting the maritime sector, his business philosophy and market prognosis, as well as, and other key topics concerning the shipping industry.

The engaging   interview concluded at 20:30 hrs and brought   further fascinating conversations among an enthusiastic audience, who explored interesting topics with A. Mr. Hadjiyiannis and continued sharing their thoughts during the dinner, in a beautiful ambient atmosphere with life music.