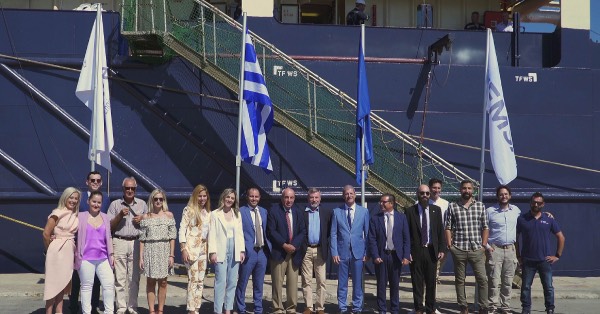 A fully refurbished high-spec oil spill response vessel for the Aegean Sea has now entered service under a four-year contract with the European Maritime Safety Agency. There is also an option to extend this agreement for a further four years. The AKTEA II OSRV will be able to reach anywhere in the Aegean within 24 hours and can collect and carry up to 4,500 tonnes of oil.

The AKTEA II OSRV is considered the most modern and capable vessel of this type in Europe. It is owned by Environmental Protection Engineering and operated by POLROM, based in Piraeus, Greece.

Based in Piraeus, Greece AKTEA II OSRV (IMO 9327516) will help safeguard Greek waters from environmental catastrophes. The tanker has onboard capacity of 4,486 m3 for recovered oil and is equipped with two systems for the mechanical recovery of oil: two rigid sweeping arms and offshore booms (2x250m) with a high-capacity skimmer. The onboard radar-based oil slick detection system increases the efficiency of oil recovery operations at sea.

AKTEA II OSRV was built in 2007, purchased by Environmental Protection Engineering (EPE) in 2021 and fully refurbished. The AKTEA II OSRV is 91m long, can be deployed on a 24/7 basis anywhere in the Aegean Sea and has 14 crew members constantly on board.

Environmental Protection Engineering (EPE) also owned AKTEA OSRV, which had been in operation for several years and contributed significantly to the protection of the Aegean Sea.

Environmental Protection Engineering (EPE) has successfully responded to more than 2,500 marine pollution incidents over the last four decades, including supporting the Agia Zoni clean up in 2017 and more recently the contributed to the anti-pollution efforts after the wrecking of the Sea Bird cargo ship in the Myrtoan Sea, east of Peloponnese last August. Environmental Protection Engineering (EPE) offers a wide range of services for waste management, oil & chemical spill response, protection & preparedness and ancillary environmental services.

“Environmental Protection Engineering (EPE) is recognised across Europe as a leading environmental response specialist. AKTEA II OSRV is the most capable vessel of this type in Europe and will provide further protection for the Aegean Sea as we continue our long-standing relationship with the European Maritime Safety Agency (EMSA). Safeguarding marine ecosystems is at the core of our business and we were delighted to see AKTEA II OSRV out on the water at this wonderful launch event.”