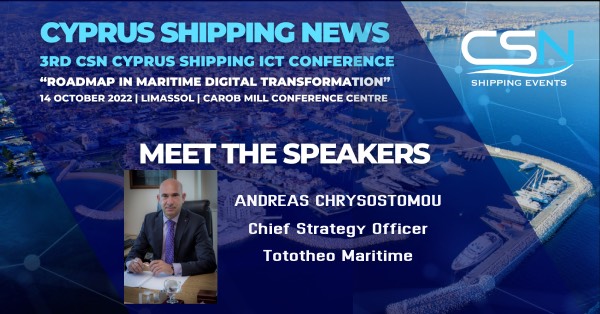 Mr. Chrysostomou is a seasoned professional in the shipping industry. He holds an MBA (Master’s in Business Administration) and he graduated from the University of Newcastle upon Tyne, UK, with a Bachelor of Engineering in Naval Architecture and Shipbuilding.

Mr. Chrysostomou, in his long-standing career, before joining Tototheo Maritime as CSO, was the Director of the Department of Merchant Shipping, (the Maritime Authority of Cyprus), CEO of Transmed shipping Co. Ltd. And Act. Secretary General of CLIA Europe.

He also held senior management roles in fields such as safety and security, protection of the marine environment and administration. He also served as the elected Chairman of the Design and Equipment Subcommittee of the IMO and of the Marine Environment Protection Committee (MEPC), one of the main Committees at IMO. He was twice elected and re-elected Chairman of the International Mobile Satellite Organization and served as member of the Board of Governors of the World Maritime University (WMU). He also served as President of the Institute of Marine Engineering, Science & Technology (IMAREST).

Mr. Chrysostomou’s skills and integrity have been acknowledged by peers, by awarding him the 2011 Award for Outstanding Contribution to Sustainable Shipping. In November 2011 he has also been presented with the Distinguished Public Service Award by the United States Department of Homeland Security, United States Coast Guard, for his invaluable service to International Shipping and in 2013 the GST Award – Leading Shipping Personality of the Decade 2003 – 2013. Furthermore Mr. Andreas Chrysostomou was awarded The Lloyd’s List Greek Shipping Award – “International Personality of the Year” 2015.

Andreas Chrysostomou is the CEO of MarineFields Holding but also the Chief Strategy Officer of Tototheo Maritime. He led a long-standing career as a civil servant ending as the Director of Maritime authority of Cyprus, he also served as an acting Secretary General of CLIA Europe. He served as an elected officer in many UN agencies such as the IMO and IMSO and recognised by peers in several occasions.