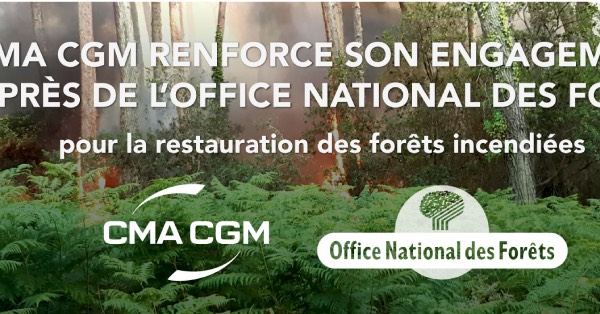 During this summer’s heatwaves, more than 70,000 hectares of forest were destroyed by fire across France, six times more than the average for the last 15 years.

In response, the CMA CGM Group and the French National Forests Office , the organization in charge of managing forests in mainland France and in French overseas departments and territories which manages close to 11 million hectares of public forests owned by the state or by local, wanted to extend and strengthen their partnership in order to provide a practical response and combat these devastating natural catastrophes.

On September 7, following on from the partnership established in 2021, CMA CGM signed an ambitious three-year agreement with the Fund-Act for the forest, an endowment fund set up by the ONF, which aims to develop, support and facilitate efforts to protect and develop forests in France. The agreement will allow rapid action to restore forests destroyed by fire.

The endowment fund accepts donations from individuals and businesses in order to fund practical projects that benefit French forests, focusing on a program with six aspects:

This year, CMA CGM is extending its partnership with ONF and making a commitment to donate €3 million over the next three years.

Through this corporate philanthropy initiative, the CMA CGM Group wants to provide long-term support to efforts to restore fire-damaged forests and help fund innovative solutions, studies and systems that improve our understanding of fire risks and prevent fires in forests across the whole of France.

The donations will be distributed as follows:

o    Restoration of public forests near coastal areas and sand dunes in the Médoc region (forests of Teste-de-Buch, Lagnereau, Hostens etc.), prioritizing the removal of burnt wood ;
o    Purchase of a fleet of vehicles.

The partnership will also go beyond remedial action by funding:

The CMA CGM Group is taking practical action for the planet

In 2021, the Group worked with ONF to address an environmental emergency following large-scale fires that devastated 7,000 hectares of forest in the Massif des Maures in the Var area. CMA CGM made a €1 million donation, which speeded up the restoration of natural spaces within damaged areas in the Plaine des Maures, via the RESPIR fund created in April 2021 by the Provence-Alpes-Côte d’Azur Region Council.

This donation funded practical action that benefited the local community:

Alongside the ONF Fund-Act for the forests, CMA CGM is reasserting its commitment to combating climate change and preserving biodiversity. The Group is working with ONF to raise awareness and educate people about the environment and about combating and preventing fires, as well as researching innovative solutions and improving knowledge about forest fires.