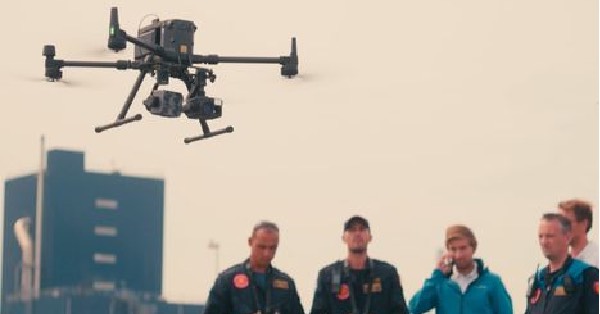 Drone flights were held in the western port area of the port of Rotterdam on 16 August for AMU-LED, the European demonstration project on the integration of drones in (urban) airspace. The demonstration is part of the preparations to prepare the airspace for autonomous flights.

Drones in the port of Rotterdam

Drones – unmanned flying systems – are increasingly being used in the port of Rotterdam by companies in the port area. There are many possible applications: deployment at incidents, water pollution and firefighting, surveillance and inspections, monitoring port operations and security, damage control, inspections of installations at terminals. But also in the construction and maintenance of infrastructure, such as roads and bridges and in emissions. The Port Authority is also increasingly deploying drones. Among other things, to support surveillance by patrol vessels and inspectors as well as for incident response. It does so in close cooperation with the Rijnmond Safety Region.

However, the Port Authority is confident that in the near future drones will have a major impact on logistics chains and smart mobility. New European regulations pave the way for developing new applications in unmanned freight and passenger transport. Fast deliveries of crucial production parts to ships at sea and the safe transport of people, for example to ships and drilling rigs, but also for business transport in the port, will then become possible. To this end, the airspace will be prepared for autonomous flights in steps over the next few years.

Safe integration of drones into our airspace requires considerable coordination and testing. This is why the Port of Rotterdam Authority participates in AMU-LED.

AMU-LED is a large-scale demonstration project under the EU’s Horizon 2020 research and innovation programme. AMU-LED will demonstrate the safe integration of manned and unmanned aircraft with the realisation of increasingly sustainable, smart cities as the ultimate goal. This will take place by conducting flight demonstrations in different scenarios, use cases and applications in urban environments.