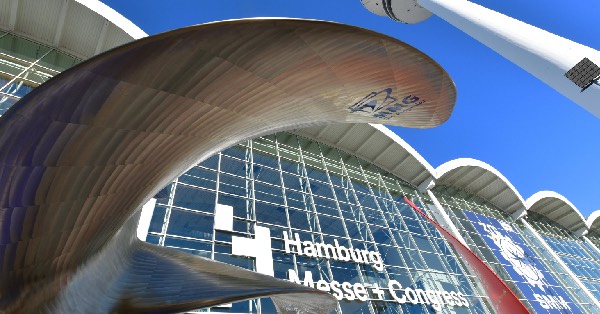 Friday was the closing day of the 30th SMM which took place on Hamburg’s exhibition campus from 6 to 9 September. During the anniversary edition of the flagship fair the maritime industry demonstrated its commitment to tackling the energy transition. Organisers, exhibitors and trade visitors alike delivered a positive summary of the event.
The enthusiasm was palpable. After a four-year wait, the international maritime community was finally able to meet for a physical SMM in Hamburg again:  For four days, 2,000 exhibiting companies and over 30,000 industry visitors from more than 100 countries formed the “United Nations of Shipbuilding”. “There was an enormous sense of anticipation, and expectations were high. The more enthusiastic I am to see that we have been able to confirm our status as the leading global maritime trade fair once again,” said Bernd Aufderheide, President and CEO, Hamburg Messe und Congress. The maritime energy transition and the technologies and expertise it requires, along with a clear commitment to making the necessary changes, were at the top of the agenda throughout the fully occupied exhibition campus and the accompanying conference programme of SMM.  Retrofitting ships was one of the key topics of this fair. The industry is facing the enormous challenge to retrofit its fleet of roughly 60,000 merchant ships progressively to make them more eco- and climate-friendly.
The presence of political leaders attested to the special importance of the shipping industry in the efforts to achieve the climate goals. During his tour of the exhibition, Kitack Lim, Secretary-General of the International Maritime Organization, IMO, was visibly impressed by the range of innovative technologies showcased. German Chancellor Olaf Scholz, the honorary patron of SMM, said in his video message, the focus of this SMM on climate-friendly technology was more than welcome since “every innovation in the maritime sector supports the global economy as a whole”. The German Federal Maritime Coordinator, Claudia Müller, praised the motto of the 30th SMM, “Driving the Maritime Transition”: “It perfectly describes the challenges facing the maritime industry today while demonstrating that we are actively driving these changes.”
The next SMM will take place in Hamburg from 3 to 6 September 2024.