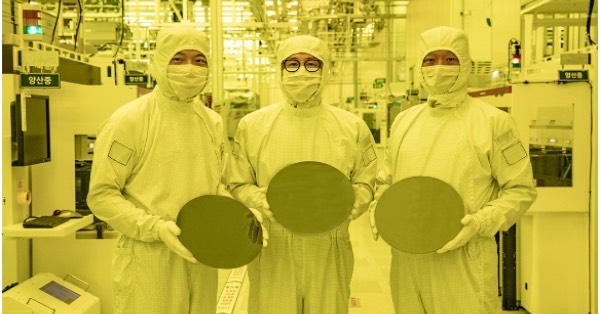 Samsung Electronics’ 3-nm chip launching ceremony is scheduled for July 25. The company started the mass production of the most advanced semiconductor product in the world on June 30. The first batch of the product considerably improved in power consumption, performance and area will be supplied to a fabless company designing chips for cryptocurrency mining.

Samsung Electronics is planning to initiate the manufacturing of second-generation 3-nm chips in 2023 and 2-nm chips in 2025. The idea is to catch up with TSMC as quickly as possible by staying ahead in terms of technological strength. TSMC is planning to start manufacturing FinFET-based 3-nm chips this month or later and employ gate-all-around (GAA) in 2025 whereas the 3-nm chips of Samsung Electronics are based on the technology more advanced than FinFET.

Meanwhile, Japanese and Taiwanese news outlets are devaluing Samsung Electronics’ achievement. For example, the Nikkei recently said that the semiconductor industry of South Korea is still highly dependent on Japanese materials and equipment and Samsung Electronics is unlikely to be able to surpass TSMC in terms of advanced process technologies.

“The buyer to receive the first batch is a Chinese cryptocurrency miner and it is a client that cannot be trusted in the long term given the current cryptocurrency market conditions,” it said, adding, “Besides, the 3-nm chips are produced not in Pyeongtaek but in Hwaseong and this implies a relatively small scale of production in that Samsung Electronics’ finest equipment is in Pyeongtaek and Hwaseong is where it develops manufacturing technologies.”

According to industry sources, this devaluation has to do with the Japan-Taiwan partnership in the industry. Japan is cooperating with TSMC in order to rebuild its semiconductor sector and TSMC’s new plant in Kumamoto is currently under construction with the Japanese government backing. TSMC, which will run the plant with Sony and Denso, opened an R&D center in Ibaraki last month.

Taiwanese newspaper DigiTimes is also claiming that Samsung Electronics is no threat at all on TSMC’s part. The Financial Times, which was acquired by Nikkei in 2015, is also expressing doubts. “Samsung Electronics failed to improve its yield even in the 5-nm process and TSMC could increase its supply to Qualcomm as a result,” it said. An expert pointed out that the current task of Samsung Electronics is to raise the yield while manufacturing the 3-nm chips. “The profitable yield level is 80 percent to 90 percent and it seems that much time will be taken to get there,” he said.