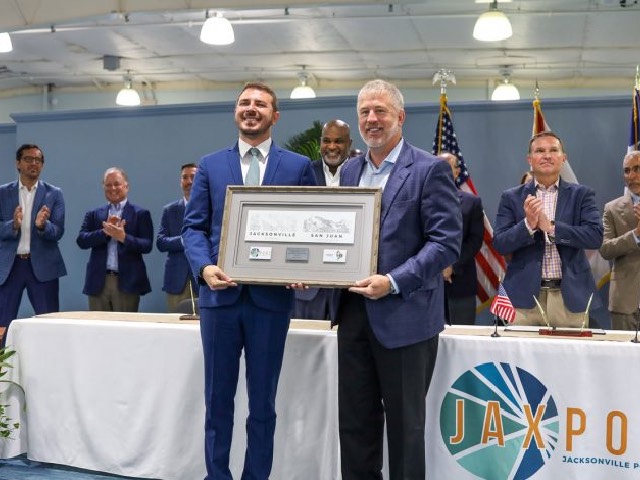 “This Memorandum of Understanding between the Jacksonville Port Authority and the Puerto Rico Ports Authority is great news for Northeast Florida and our entire state,” said Florida Governor Ron DeSantis. “Florida is proud to be the second home to many Puerto Ricans, and this new agreement will build on the special relationship between the Sunshine State and our island neighbor. I look forward to the positive economic impacts this agreement will have on JAXPORT, the city of Jacksonville and Puerto Rico.”

“This MOU highlights the strong connection between Jacksonville and Puerto Rico and strengthens our efforts to collaborate when and where both communities can benefit,” said Jacksonville Mayor Lenny Curry. “I applaud Eric Green, the board, and the amazing team here at JAXPORT. With our friends and colleagues in Puerto Rico, we’ll continue to see greater job growth and economic development for our communities in the years ahead.”

Jacksonville is the number one port in the United States for trade with Puerto Rico, handling nearly 90 percent of all sea trade between the island and the U.S. mainland. Puerto Rico is also Jacksonville’s number one trading partner by annual cargo volume, with nearly 800,000 container units and thousands of automobiles shipped annually between the two regions.

The MOU acknowledges the importance of this relationship and identifies steps to strengthen it. Under the MOU, PRPA and JAXPORT will collaborate on key areas including: business development and marketing, relationship building with current and potential ocean carriers and shippers, and best practices in environmental protection, operations and security. The ports will also work together to support each other’s growth, including sharing best practices for funding and completing major infrastructure enhancements.

“Today’s signing ceremony solidifies the great partnership between JAXPORT and the Puerto Rico Ports Authority,” said Florida Department of Transportation Secretary Kevin J. Thibault, P.E. “A major foundation of this partnership is transportation infrastructure including the navigation channels used by ships, the waterside wharfs used to load cargo, and local roads, interchanges and highway networks which connect Puerto Rican commerce to the rest of the nation. The investments being made by the state of Florida and JAXPORT will have multigenerational benefits and continue to support this important relationship for decades to come.”

“There are historical ties and a decades-long relationship between the two parties. The benefits to both ports and both cities of inter-port cooperation will achieve the goals of building deeper business relationships of mutual benefit and promoting economic growth,” Pizá Batiz said.

“After entering the trade by moving a few thousand containers in the 1950s, we are incredibly proud and humbled by the success we now see today,” said Green. “Trade with Puerto Rico represents about half of JAXPORT’s container business, a percentage that has held steady even as our international volumes have continued to grow over the years. We look forward to this continued partnership and are proud of the benefits it will have for both communities for generations to come.”

San Juan, Puerto Rico is one of Jacksonville’s eight Sister Cities through Sister Cities International. Under the partnership, the two cities work together to promote cultural understanding, foster educational exchanges and stimulate economic development between the two communities. 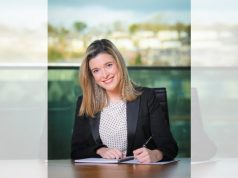 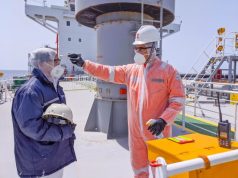