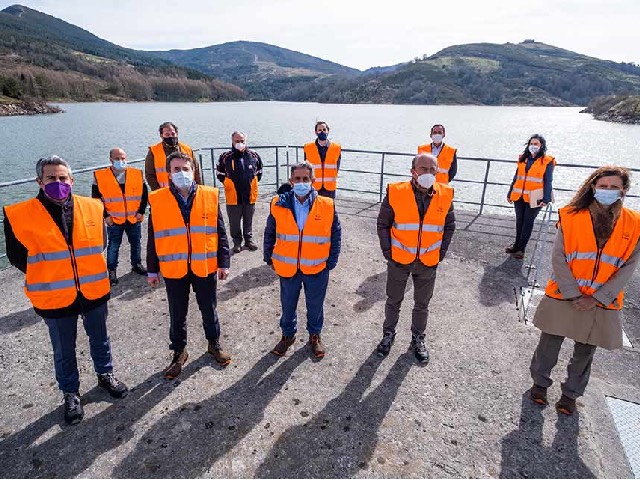 Today, the Regional President of Cantabria, Miguel Ángel Revilla, met with the CEO of Repsol, Josu Jon Imaz, at the Aguayo hydroelectric plant to learn about the technical details of the expansion project of the pumped storage plant, known as “Aguayo II”. This is one of the initiatives contemplated in the Strategic Plan 2021-2025 of the multi-energy company and it is part of its objective of becoming a net zero emissions company by 2050.If developed, this project would increase the installed capacity of the current pumped-storage station by 1 gigawatts (GW), thus, raising it to a total of 1.4 GW – the second largest in Spain. It would be the largest private investment in the history of Cantabria at approximately €700 million.

The Vice President of the Regional Government of Cantabria, Pablo Zuloaga, the Regional Minister of Industry, Tourism, Innovation, Transport and Commerce, Francisco Javier López Marcano, the General Director of Client and Low-Carbon Generation of Repsol and Chairwoman of Repsol Electricidad y Gas, Maria Victoria Zingoni, as well as Repsol’s Director of Generation and Markets, Javier Anzola, also attended the visit to the facilities.

The Aguayo hydroelectric plant is part of Repsol’s low-carbon generation business, one of the four pillars of Repsol’s new organizational model. The company will continue to increase its asset portfolio and seek international expansion with the aim of becoming a global operator, with a generation capacity of 7.5 GW by 2025 and 15 GW by 2030.

The company plans to continue the organic growth of this business through to the development of a portfolio of projects in operation, which between 2020 and 2025 will increase at an annual rate of more than 500 MW. Among the planned initiatives is the possible expansion of the Aguayo facility that has already received a favorable environmental impact assessment. The Regional Government of Cantabria and Repsol intend for this project to be considered under the framework of the European recovery funds. For its final approval, a set of general conditions and a regulatory framework must also be in place to guarantee its return.

The Regional President of Cantabria highlighted the importance of this project for the region and stressed that it has “all the support” of the regional government. “We are facing the largest investment in the history of the region at time of economic hardship, as a consequence of the crisis caused by the pandemic, so it can be a real game-changer and definitively place the region among the territories producing renewable energy.”

or his part, Josu Jon Imaz said that Repsol “has the ambition and desire to carry out the expansion of Aguayo.” “It is an important project not only for the company, but also for Cantabria and for the Spanish power system. And it is a project that contributes to Repsol’s global decarbonization targets and allows us to use our industrial capacities to support the economic development of the country and the region at a time of great importance for the recovery of the economy.”

The Aguayo hydroelectric pumped storage plant, located in San Miguel de Aguayo (Cantabria), has been in operation since 1982. It is a reversible pumping plant, which allows it to help balance the electrical system by storing energy at times when there is an excess of renewable production and generating energy when demand is highest.

One of the key aspects of the project is its compatibility with the environmental conservation of the surroundings. The Aguayo expansion combines greater efficiency in generation from renewable sources with an underground installation without impact to the landscape, providing an environmentally sustainable solution.

Furthermore, for the start-up of Aguayo II it would not be necessary to expand the existing reservoirs, therefore a greater amount of energy would be obtained from 100% renewable sources with installations that respect the environment.

On the other hand, the expansion of the plant would allow strong industrial development and promote employment in the region. In addition to the direct and indirect jobs required during the useful life of the plant, construction during the more than four years planned for its commissioning will require a large number of workers that would provide a significant economic boost to the surrounding area. It is estimated that at peak times there would be around 1,000 people working directly on the construction site.

The investment of approximately €700 million by Repsol would also open up new possibilities to lift the regional economy. The Aguayo II project is in line with Repsol’s commitment to be a net zero emissions company by 2050, in compliance with the Paris Agreement.