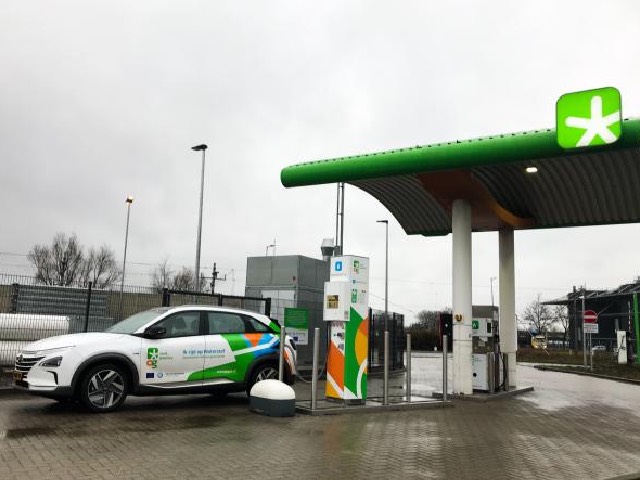 The first hydrogen filling station in the port of Amsterdam opened today. The filling station of OrangeGas is located on the Australiëhavenweg, along the A5 motorway and is open 24/7. This is another step towards a hydrogen economy.

Only clean fuels are offered at the location on the Australiëhavenweg. In addition to hydrogen, bio-CNG (green gas), electricity and liquid CO2 will also be added later, HVO100 and LBG. HVO100 is a synthetic fuel made 100% from residual materials from vegetable oils and fats. LBG is Liquefied Bio Gas.

Joyce van Os de Man, director Benelux at OrangeGas: ‘It’s incredibly cool that the hydrogen station in Amsterdam is now open. This filling station also offers other clean fuels. With this station we are perfectly in line with Amsterdam’s zero-emissions policy’.

The municipality of Amsterdam is one of the customers of the hydrogen filling station. Together with seven other port companies, their ambition is to have 20 vehicles running on hydrogen within two years. There are also taxis and private individuals that are already running on hydrogen. There is a great deal of interest from the transport and construction sectors in switching to hydrogen-powered trucks. More hydrogen stations will follow soon in the Amsterdam port.

Port of Amsterdam will be focusing on hydrogen in the coming years. In order to achieve a climate-neutral society in 2050, we will need not only sustainable energy sources such as solar and wind energy, but also bio- and synthetic fuels and hydrogen. This hydrogen station is one of the many initiatives in which Port of Amsterdam is playing a role by facilitating and/or investing. Driving on hydrogen is emission-free. Hydrogen is not a fuel but an energy carrier. The cars fill up with hydrogen, which is converted into electrical energy by a fuel cell in the vehicle.