MABUX World Bunker Index (consists of a range of prices for 380 HSFO, VLSFO and MGO Gasoil) in the main world hubs) demonstrated downward changes on Mar.01: 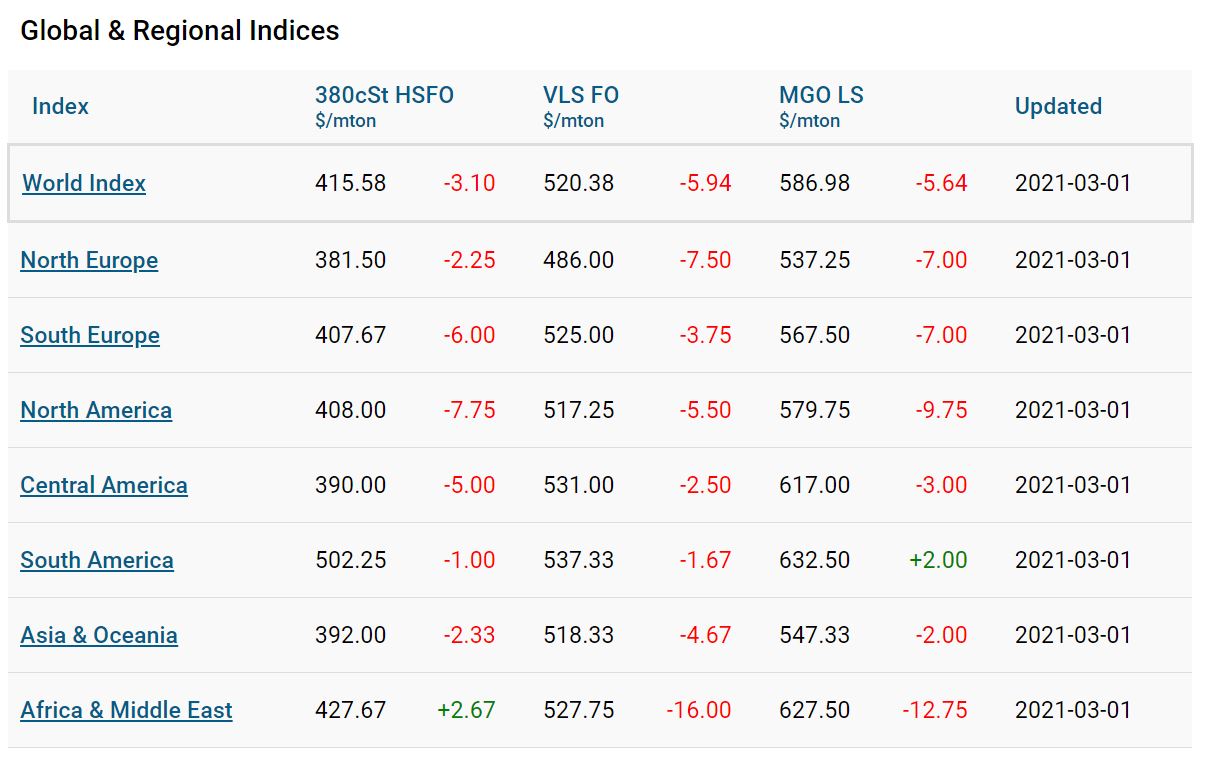 Correlation between the Market Bunker Price Index (MBP) vs MABUX Digital Bunker Price Index (DBP) in four major hubs on Mar.01 remained undercharging of 380 HSFO bunker grades in Rotterdam (-25USD), Singapore (-27USD), Fujairah (-20USD). In Houston that kind of fuel is overcharged (+6USD) as well as VLSFO (+25USD) and MGO LS (+5USD). VLSFO is undercharged in Rotterdam (-2USD) and in Singapore (-12USD) while in Fujairah MBP Index coincides with DBP Index. MGO LS is undervalued in all hubs (except of Houston) in a range from minus 18USD (Fujairah) to minus 39USD (Singapore).

Brent for May settlement decreased by $2.44 to $63.69 a barrel on the London-based ICE Futures Europe exchange. West Texas Intermediate for April fell by $0.86 to $60.64 a barrel on the New York Mercantile Exchange. The Brent benchmark traded at the premium of $3.05 to WTI. Gasoil for March delivery lost $5.25.

There are worries in the market, that the Organization of the Petroleum Exporting Countries and its allies, a group known as OPEC+, will boost oil output. The group meets on Thursday, Mar.04, and could discuss allowing as much as 1.5 million barrels per day (bpd) of crude back into the market. OPEC oil output fell in February as a voluntary cut by Saudi Arabia added to reductions agreed to under the previous OPEC+ pact, ending a run of seven consecutive monthly increases. Current reductions stand at just over seven million barrels per day or 7% of global supply.

At the same time, China’s factory activity growth slipped to a nine-month low in February, which may curtail Chinese crude demand and pressure oil prices. Moreover, COVID-19 remains a global threat, as the number of global cases rose for the first time in almost two months in the past week.

We expect bunker prices can decline today. Prices for 380 HSFO may fall by 10-14 USD, Prices for MGO may decrease by 4-7 USD.

Capital increase in TORM in connection with delivery of vessel