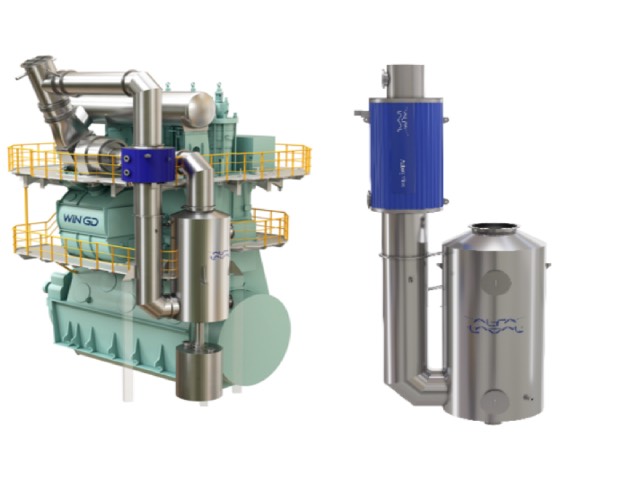 Alfa Laval – a world leader in heat transfer, centrifugal separation and fluid handling – has launched a new marine environmental system, Alfa Laval PureCool. The system, in combination with WinGD’s iCER technology, can reduce methane slip from ships’ gas engines which, if released in the atmosphere, has a higher global warming potential than CO2. The new PureCool system is the latest addition to Alfa Laval’s extensive marine environmental product portfolio.

The International Maritime Organization (IMO) has the target of cutting vessel-related greenhouse gas emissions by at least 50 percent by 2050. As the marine industry works towards a future based on non-fossil fuels, Liquid Natural Gas (LNG) is expected to be one of the transition fuels towards decarbonization.

The new Alfa Laval PureCool system, in combination with WinGD’s iCER technology (as mentioned in a press release on June 25, 2020) targets an unaddressed emission source: methane slip, which is the small percentage of unburned methane that escapes through the engine when LNG is used as fuel. Although combusted LNG releases less CO2 than other fossil fuels, the methane has a higher global warming potential than CO2, which makes the unburned fraction a concern. No regulations currently exist for methane slip, but the issue should be addressed if the marine industry is to reach a 50 percent reduction in marine greenhouse gas emissions by 2050.

“As LNG is an important bridge fuel in the transition to a zero-carbon future we need to mitigate the  negative environmental consequences  of this fuel as far  as possible,” says Sameer Kalra, President of the Marine Division. “Our new Alfa Laval PureCool system not only helps in the reduction of methane slip but also enables fuel savings which makes it a good solution for both our customers and the environment.”

Alfa Laval PureCool is the latest addition to the company’s PureThinking concept introduced more than 15 years ago which. It includes, among several products, key systems like Alfa Laval PureBallast and PureSOx, which enable shipowners to comply with marine regulations.

Did you know that… according to DNV GL, the shipping industry’s fuel mix in 2050 is expected to have switched from being almost entirely oil dominated, to a mix of low- and/or zero-carbon fuels (60 percent) and natural gas (30 percent)?