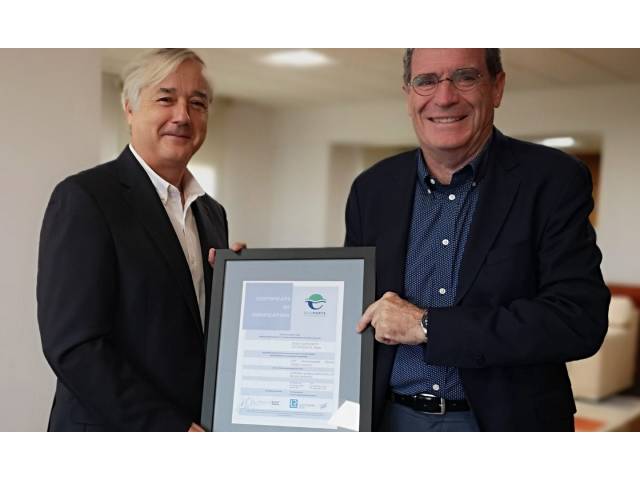 All the investments planned for the coming years in the area of Valenciaport involve a series of sustainability commitments to achieve the 2030 objective, zero emissions

Valenciaport has been named the smartest port in the Spanish port system, leading the ranking in categories such as environment

València, October 15th, 2020.- The Port Authority of Valencia (PAV) has renewed its PERS (Port Environment Review System) environmental certification, a European standard that highlights the specific management of the port sector and which is promoted by the European Sea Ports Organisation (ESPO). The PAV has held this certification since 2003 and has been successively renewed in compliance with the strictest environmental requirements established by ESPO. This certification consolidates the European recognition of excellence in the work for sustainability and involvement with an environment that respects the environment that the whole Valencian port community carries out.

Valenciaport’s objective with 2030, zero emissions, is to be two decades ahead of the objectives of decarbonisation and reduction of greenhouse gases that Spain, Europe and international organisations have projected for 2050.  The actions and investments planned by the APV have been carried out for many years now under the shared guideline of the port community to make growth and sustainability compatible.

Thus, the investments planned for the coming years in the area of Valenciaport involve a series of commitments to sustainability in order to achieve this objective of zero emissions. These investments are aimed at promoting the use of alternative energies to traditional fossil fuels such as hydrogen, renewable energies (photovoltaic, wind) and LNG, without ruling out other alternatives that are currently being evaluated. Thus, for example, progress is already being made in the construction of an electrical substation that will allow the auxiliary engines of ships to be connected to ground electricity while they are at berth, a technology known as On-shore Power Supply, Cold Ironing or Shore connection.

In this line, it is necessary to highlight that projects such as the new container terminal projected in the northern expansion will be the most environmentally advanced in the world, since it will minimise CO2 emissions by supplying electricity to ships, will contemplate the use of up to 98% of electrical machinery, the origin of energy will be 100% from renewable sources, or the reduction of current CO2 emissions by 98%.

Similarly, the new passenger terminal stipulates in the specifications that the berths must be equipped with a network to supply electricity to the ships at berth; and the roofs of the existing buildings must allow the installation of photovoltaic solar panels.

As part of the PAV’s commitment to environmental management and respect for the environment, the air quality monitoring network will be extended by installing new control cabins, an initiative within the framework of the GREEN C PORTS project, and seven new environmental sensors have already been fitted to complement the existing equipment. It should be noted at this point that the GREEN C PORTS project, financed by the EU through its CEF programme, has been selected as a finalist in the EnerTIC2020 awards in the Intelligent Infrastructures category.

The PAV was the first port authority in Spain to register the Carbon Footprint of a port area in the Carbon Footprint register created by the Ministry of Ecological Transition, obtaining the “Calculation” stamp. Furthermore, Valencia is also a pioneering port in the world in measuring its Carbon Footprint under the ISO 14064-1:2012 standard, a methodology which includes measurement on four levels: emissions from electricity and fuel consumption by the PAV, concessionary companies, ships and land transport produced within the port area of Valencia.

The PERS system is the only environmental management standard specific to the port sector and incorporates, in addition to the main general requirements of the recognised standards (such as ISO 14001), the specifications of the ports based on the recommendations of ESPO, which are audited by an independent firm of recognised international prestige such as Lloyd’s Register.

Valenciaport is part of the “EcoPorts” network of ports which is the main environmental initiative of the European port sector and whose objective is to improve environmental management and create awareness of environmental protection through cooperation and the exchange of knowledge between the different ports.