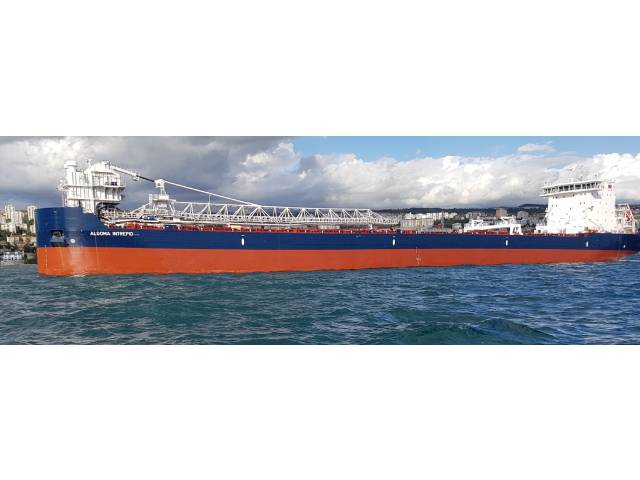 Algoma Central Corporation (“Algoma” or the “Company”) (TSX:ALC), a leading supplier of marine transportation services, today announced that it has taken delivery of the Algoma Intrepid, the second Equinox 650’ Class self-unloading dry-bulk carrier, and the ship has begun her voyage to Canada from the 3 Maj Shipyard in Croatia. The vessel, the ninth Equinox Class vessel to join the fleet, will journey across the Atlantic to Canada where she is expected to begin trading on the Great Lakes in November.

The Algoma Intrepid is the sister ship to the Algoma Innovator, which entered service in early 2018 as the newest and most efficient river class vessel to enter the Great Lakes market in almost 40 years. Like her sister ship, the Algoma Intrepid features an impressive forward-mounted boom, enabling cargo to be delivered at hard-to-reach docks, providing greater flexibility for our customers.

“The arrival of the Algoma Intrepid will cement our position as the largest and most diverse fleet on the Great Lakes and St. Lawrence Seaway,” said Gregg Ruhl, President and CEO of Algoma. “We are very much looking forward to her arrival and are eager to not only welcome her into the Algoma fleet but to also introduce her to our customers. I would like to thank the Algoma Equinox Class team for another successful delivery and to the crew on board, wishing you all a safe voyage bringing the ship home,” continued Mr. Ruhl.

In other Equinox Class news, the keel has been laid for the new Captain Henry Jackman at Jiangsu Yangzi-Mitsui Shipbuilding Company in China. This Seaway-Max gearless bulk carrier is expected to be delivered during the second quarter of 2021 and she will be the newest and most efficient vessel in Algoma’s domestic fleet. The design is being coined “Equinox 3.0” and it includes improvements in cargo deadweight capacity and equipment, all while maintaining the numerous performance efficiencies of the original Equinox Class design.