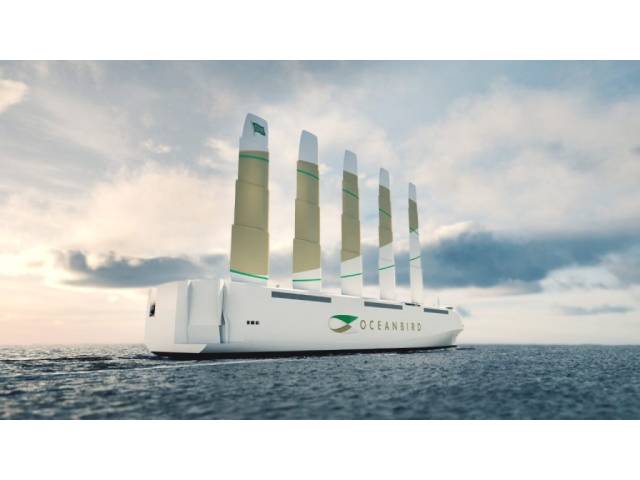 Oceanbird is like no other cargo vessel. Mostly because of its 80 metres high wings, which gives the ship enough power to transport 7,000 cars across the ocean.

Evolution equipped birds with wings to enable them to harness the power of the wind. It’s the same with Oceanbird. But instead of feathers, the wings are made of steel and composite materials. Thanks to a telescopic function, the wings can be reduced to a quarter of its length – from 80 to 20 metres. This function is key for several reasons, most important being:

The team behind Oceanbird considered a folding rig earlier in the project. A telescopic solution where you can adjust the height of the sails by pushing sections up and down, have many advantages. The construction is more robust, it´s possible to quickly get rid of wind power and it also saves space upon deck. You don’t have to expose the whole sailing area if you just need a small amount of power. The telescopic solution is also more efficient from a sailing performance point of view.

It is close at hand to compare Oceanbird with traditional sailboats, but there is a lot that differentiates them. The most prominent is the sails. For Oceanbird to efficiently carry 7,000 cars across the Atlantic the vessel is equipped with five rigid wing sails, rather than traditional soft sails.

“The rigid wing sails have the advantage of providing both superior performance and durability compared to soft sails” says Mikael Razola, project leader at Wallenius Marine.

Designing Oceanbird, we have to pay much more attention to the aerodynamics than we normally do. Not only do the wings have more in common with airplane wings than traditional sails, they also interact with the hull in a very complex way. We have spent significant effort in designing all the different parts of Oceanbird exposed to the wind as an integrated system. This means that we can actually harness the power of wind in a very efficient way, where the different parts of the hull and wings are working closely together, boosting the vessel performance.

The wings will be able to turn 360 degrees, and all five can be in different positions.

“For optimal performance the wings are not synchronized in the way that they are all aligned in the same direction. Rather, there are variations along the length of the ship. A control system that monitor for example wind direction and wing loads, will determine the optimal positioning.”

One question that we have received after the launch of Oceanbird, is if existing ship yards have the capability to build this complex design.

“Absolutely. High-quality shipyards have great competence in familiarizing themselves with new constructions. The wings may be a different story as they, at least initially, will need some extraordinary production skills. ”