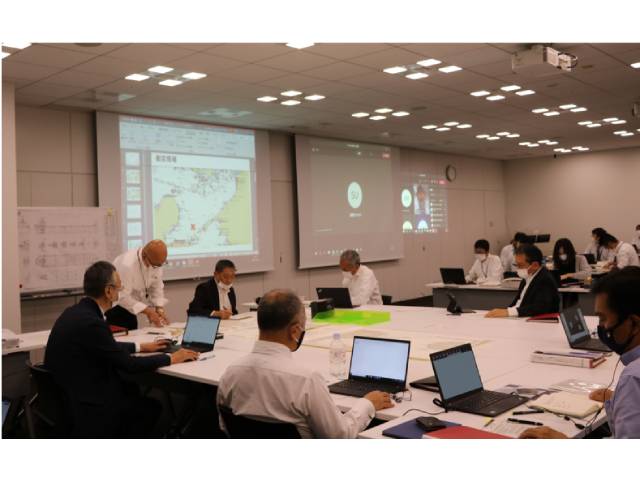 On October 6th, 2020, an “Emergency Response Drill” was carried out as a part of, optimum training on emergency response, preparedness for any kind of major maritime accidents.

The scenario of the drill developed when a “K” Line Coal Carrier collided with a Coastal Tanker when she was transiting in the Seto Inland Sea. The accident damaged the tanker’s hull and breached its cargo tank, resulting to its oil cargoes spilling from the damaged cargo tank. The spilled oil reached the coasts nearby; in addition, a crew of the said Tanker was reportedly missing. Professionals from other related firms of law, insurance, consulting, and the Ship Management Company actively cooperated and participated in the exercise.

To prevent COVID-19 infection, remote work from home for employees were established. We sought to enhance our communication by using online tools during an emergency response and then identified the points and tasks to work and improve on.

At the end of the drill, a mock press conference was held at both the press room and online simultaneously as a part of the complete drill proceedings. Mr. Myochin, the CEO of “K” Line, and other representatives attended the Q&A session of press briefing. Many questions were raised by the attendees as a media reporter that made the event more realistic and momentous.

“K” Line principle and vision calls for enhancing “Safety”, “Environment” and “Quality”. We are preparing for any unexpected and unforeseen circumstances through the “Emergency Response Drill”. Furthermore, we promote safety in navigation and environmental conservation and quality enhancement while doing work on awareness building activities like “Safety Campaign”.