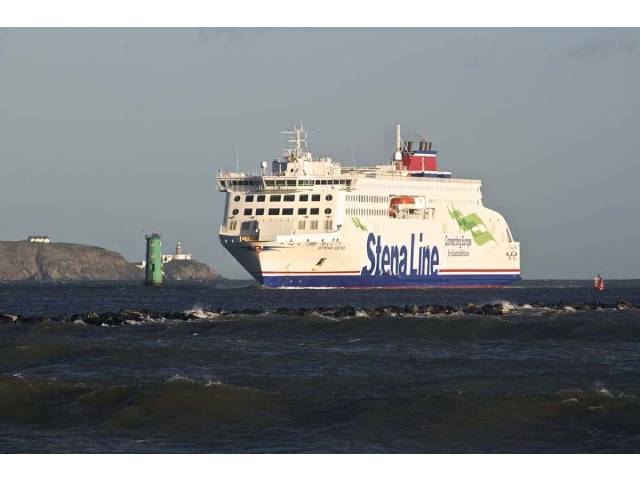 Stena Line’s STENA ESTRID is set to takeover from STENA SUPERFAST VIII tomorrow morning. The ship, which was only introduced to the Dublin – Holyhead route earlier this year, is this years dry dock relief vessel for the Cairnryan route. She will be released from the Holyhead route this evening by STENA NORDICA before making her way north to Belfast.

Both STENA SUPERFAST VIII and STENA SUPERFAST VII will dry dock at Harland & Wolff again this year. Altogether, the ships are expected to be of service for a total of five weeks. STENA ESTRID will cover both dry docking’s. The 40,500gt Holyhead based ship is expected to arrive in Belfast at around 4am after sailing overnight from Wales. Her first sailing to Cairnryan is scheduled to be at 7am, slightly earlier than the usual 7:30pm departure time.

STENA SUPERFAST VIII is expected to arrive in Belfast later than normal at 07:15, with her departure from Cairnryan 45 mins later than normal at 04:30. This should allow a seamless changeover of the two vessels. These ammended times are for tomorrow September 10 only, and the normal timetable will apply afterwards.

Once STENA SUPERFAST VIII has discharged all cargo and passengers she is expected to make her way to Harland & Wolff’s outfitting quay before entering dry dock. According to Stena Line, STENA ESTRID will service the Belfast – Cairnryan (Loch Ryan Port) route from September 10 to October 13. It has previously been stated that the Dublin ship is being brought to Belfast to cover as passenger demand is higher here due to continued coronavirus restrictions in the Irish Republic.

While this is ‘Estrid’s’ first visit to Belfast, she has been to Cairnryan before as she underwent maintenance at the Scottish port earlier this year. STENA ESTRID is an almost identical sister-ship to STENA EDDA which sails on the Belfast – Liverpool (Birkenhead) route. This will be the first time the two ships have met since STENA ESTRID left her builders yard in China towards the end of last year.