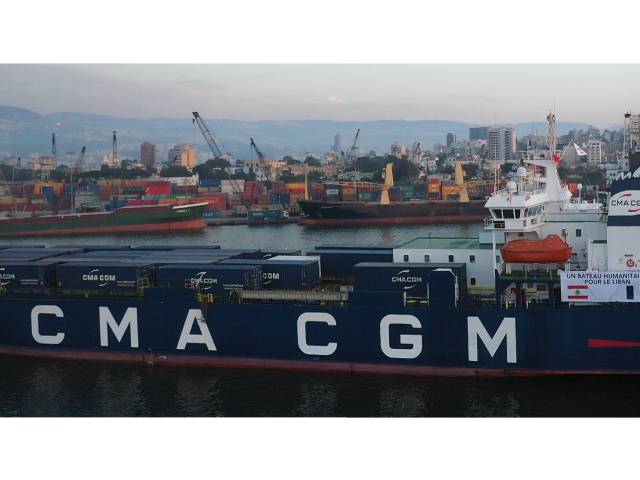 During his official trip to Lebanon on September 1, Emmanuel Macron visited the port of Beirut where the Aknoul, a roll-on roll-off ship belonging to the CMA CGM Group, was unloading its cargo of humanitarian supplies. Rodolphe Saadé, Chairman and Chief Executive Officer of the CMA CGM Group, made a presentation to the French President about the humanitarian operation, named “A Humanitarian Ship for Lebanon.” Also present were Tanya Saadé Zeenny, President of the CMA CGM Foundation, representatives of donors (Saint Gobain and Sanofi) and representatives of the NGOs receiving the humanitarian aid (including Beit el Baraka, Arcenciel, Offre Joie and the Lebanese Food Bank).

Donations to help meet the essential needs of the Lebanese people

The Aknoul was fully loaded, and its cargo consisted of donations from more than 70 organizations in France:

To distribute the Aknoul’s humanitarian cargo, the CMA CGM Group used the expertise of its CEVA Logistics subsidiary, which is leading the port operations and transferring the donations by road to the Beirut Hippodrome, where they will be distributed to NGOs. The transfer of supplies to the Hippodrome is being supervised by the Lebanese army. Final distribution is being overseen by the French Embassy in Lebanon, with each recipient signing receipts for donations received. Donors will therefore make sure that their donations are distributed to their designated recipients.

CMA CGM resumed operations at the port of Beirut on 10 August. Every week, 9 CMA CGM ships call in Beirut and 3 in Tripoli. As a result, the CMA CGM Group’s shipping services are carrying essential supplies to the Lebanese people and supporting the resumption of the country’s export activities.

The day after the tragic explosion that hit Beirut, the CMA CGM Group reacted swiftly by arranging the transportation of an emergency response team and emergency medical equipment to the city. Rodolphe Saadé saw the extent of the damage when he visited Beirut alongside the French President on August 6. In response, the CMA CGM Group, via its Foundation, decided to take action in solidarity with the Lebanese people, deploying one of its ships, free of charge, to carry humanitarian supplies.

This relief operation, called “A Humanitarian Ship for Lebanon,” was organized in partnership with the Crisis and Support Centre of the French Ministry for Europe and Foreign Affairs and the French Embassy in Lebanon and has involved:

The collection of donations: the CMA CGM Group’s Foundation and teams worked to attract and bring together more than 70 donations from companies, NGOs, French public-sector bodies and individuals.

– One third of the donations consists of building materials such as tiles, cement, fiberglass and plasterboard.

– One third consists of food staples such as flour, cereals and grain.

A dedicated task force: a joint operation between CMA CGM and the French Ministry for Europe and Foreign Affairs was set up in Marseille and Beirut to assess proposed donations, vet the NGOs and other entities that would receive them and organize transport as quickly as possible.

Identification of recipients: each donation was analysed in cooperation with the French Embassy in Lebanon, which certified the donation and specified its recipient in Beirut. Recipients comprise NGOs and partners that are recognized for their efforts in Lebanon.

Centralization of donations: the CMA CGM Group used its logistical expertise to collect donations in warehouses, place them into containers and load them onto the Aknoul.

Transportation of donations by sea: the Aknoul, a roll-on roll-off ship owned by the CMA CGM Group, is perfectly suited to transporting humanitarian supplies. It left Marseille for Beirut on August 25, fully loaded with containers, vehicles (ambulances, utility vehicles and handling vehicles) and pallets.

Delivery of humanitarian supplies: in Beirut, the CMA CGM Group is organizing port operations and the transfer of relief supplies by road to the Beirut Hippodrome, where they will be distributed to NGOs and hospitals. The transfer to the Hippodrome is being supervised by the Lebanese army. Final distribution is being overseen by the French Embassy in Lebanon.