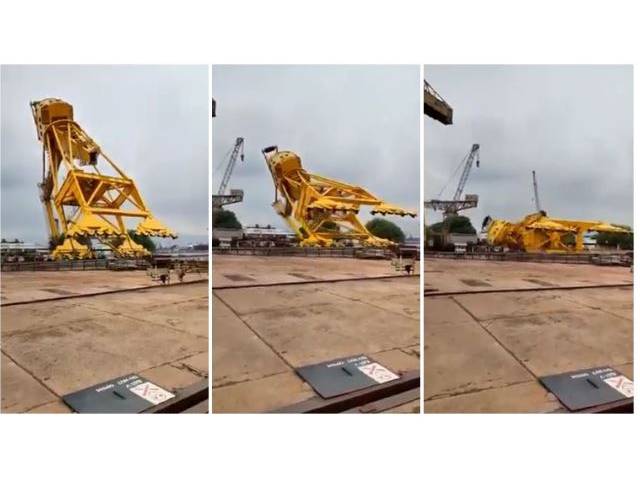 Load bearing trial being carried out when accident occurred. The 70-tonne crane, which was built by the Mumbai-based Anupam Cranes two years ago but was yet to be made operational, had been undergoing load testing when the mishap took place.

Eleven persons were killed on the spot when a crane collapsed and fell on workers at the Hindustan Shipyard Limited here on Saturday.

All of the victims were employees and working at the site. While 10 bodies have been retrieved from the debris and identified, the body of the eleventh person is still to be retrieved. It is learnt that the body is trapped under tonnes of steel and efforts are under way to recover it using cutting tools.

According to the district administration, among the 10 identified, four of them were permanent employees of HSL and six were from three contracting agencies. While two were from Lead Engineers, three were from Greenfields Corporation and one was from Squad 7.

The crane that collapsed was a jetty level luffing 70 MT crane. The work on the crane reportedly commenced in 2009, when the contract was allotted to Mumbai-based Anupama Industries. The company left in 2012, leaving the work half done.

As per sources in HSL, the work on the crane recommenced this year by another contracting firm, Greenfields Corporation, and Lead Engineers and Squad 7 were also involved in the work.

The work was completed and trial run was being done for load bearing capacity for the last couple of days. After lifting about 50% to 60% of the load in the last couple of days, on Saturday the trial was being done for 100% capacity, when the crane buckled and collapsed. People who were standing below, seeing the crane collapsing ran to safety, said Commissioner of Police Rajeev Kumar Meena.

As per district officials, the deceased have been identified as Jagan, Prasad, Ramana and Satyaraju from HSL; Naga Devulu and Bhaskar from Lead Engineers; Venkata Rao, Siva and Chaitanya from Greenfields and P.B. Ratnam from Squad 7.

Tourism Minister M. Srinivasa Rao said that he had spoken to the District Collector who sent team of officials to the spot. He said that he would take up the issue with Chief Minister Y.S Jagan Mohan Reddy and see that the families of the deceased got adequate financial compensation.

Meanwhile the gates of HSL were closed and no one was allowed inside. Scores of people including kin of the deceased gathered outside and blamed the management for not taking proper safety precautions.