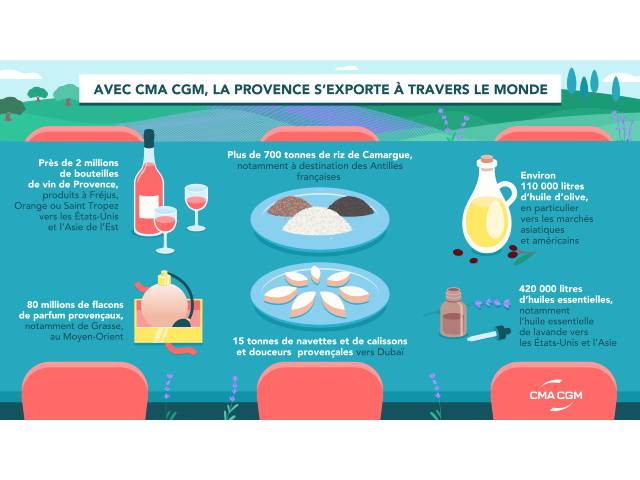 Every year, the CMA CGM Group, a world leader in shipping and logistics, carries Provençal goods to destinations around the globe. Olive oil, Camargue rice, Provence wines, perfumes from Grasse and lavender essential oil are transported to the Caribbean, the Middle East, the United States and Asia.

CMA CGM links Provence with the rest of the world

The CMA CGM Group, a major actor of international trade, transported over 22 million TEUs (Twenty-foot Equivalent Units) in 2019. The Group particularly leveraged its expertise for the exportation of Provençal products.

In 2019, CMA CGM’s fleet shipped the following renowned Provençal goods that have come to symbolize the region’s cuisine:

Over 700 tons of Camargue rice, with the French Antilles a key destination,

Close to 2 million bottles of Provence wine produced in Fréjus, Orange and Saint-Tropez to consumers in the United States and Eastern Asia,

Around 110,000 liters of olive oil to markets in Asia and the Americas,

15 tons of navette and calisson cookies and other Provençal sweets to Dubai.

It also ships the region’s other specialty products around the world:

80 million flasks of Provençal perfume, especially from manufacturers in Grasse, to the Middle East,

420,000 liters of essential oils, including lavender essential oil, to markets in the United States and Asia.

CMA CGM has deep roots in Marseille and its region

Ever since it was founded in Marseille in 1978, the CMA CGM Group has carefully cultivated its deep roots in the city and surrounding region where its entrepreneurial adventure began. The Group is actively involved in the development of the region via its shipping services that connect the area with the rest of the world, its bold architectural programs, including the construction of the Jacques Saadé Tower and the Mirabeau project, and the support provided by the CMA CGM Foundation to NGOs operating in the region.