One of the most joyful rituals in the life of a cruise ship is when it is officially “handed over” from the shipyard to its cruise line. This week marks just that moment for Silversea’s Silver Origin.

“With Manfredi and other colleagues,” says Silversea Cruises President and CEO Roberto Martinoli, “we traveled to Rotterdam to take delivery from Dutch shipyard De Hoop of the first expedition newbuild in the history of Silversea. This day has been significant under many aspects, to start it is a testament of how the world is slowly opening up from the lockdown we have all been forced into.

“Also this delivery is proof that we all have the power to overcome almost anything: the fact that this small yard in the Netherlands managed to complete our ship under incredible circumstances is proof of human resilience and ingenuity, as well as European craftsmanship, characteristics which are at the soul of our company.”

Last but not least, adds Martinoli, “it was a great example of team cooperation with our Royal Caribbean colleagues to design and deliver this beautiful vessel.” 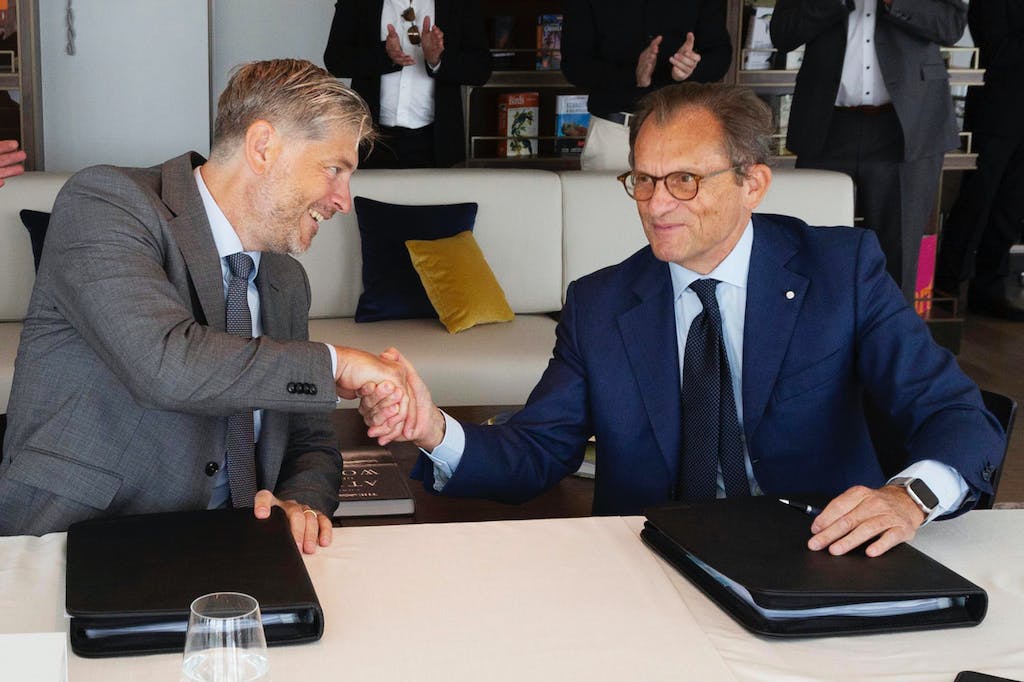 Delivery of Silver Origin is particularly symbolic because it represents the culmination of more than half a million hours of work. It’s a multi-year effort that begins with a glimmer of an idea before moving into design, budgeting, sustainability and, finally, construction. It’s also the first newbuild to join the fleet since Silversea Cruises joined the Royal Caribbean group.

Every ship, just like every newborn baby, is special. But perhaps Silver Origin is a little bit more special than usual for more reasons. That’s because Silversea has incorporated aspects, from technological to environmentally-friendly and from decor to new venues, that infuse the ship with the light, colors, stories, cuisine and ambience of the Galapagos. And, now that it’s officially handed-over to Silversea, Silver Origin is bound for the Galapagos where it will sail year-round.

Silversea Cruises has offered luxury expedition voyages within the archipelago since 2013. Still, creating a new ship, especially one that focuses squarely on the Galapagos, has presented both opportunities and challenges, not to mention De Hoop’s successful effort to complete a newbuild during a global pandemic. In nods to its design, technology, and hospitality, both onboard and onshore, Silver Origin represents a lot of “firsts” – not just for the cruise line but also for raising the bar for new travel experiences in the Galapagos. “Anybody who has been to the Galapagos knows the archipelago’s unique beauty,” Lefebvre d’Ovidio tells us this week.  “From its endemic animal species to the ancient lava formations. There is simply no place like it on Earth.”