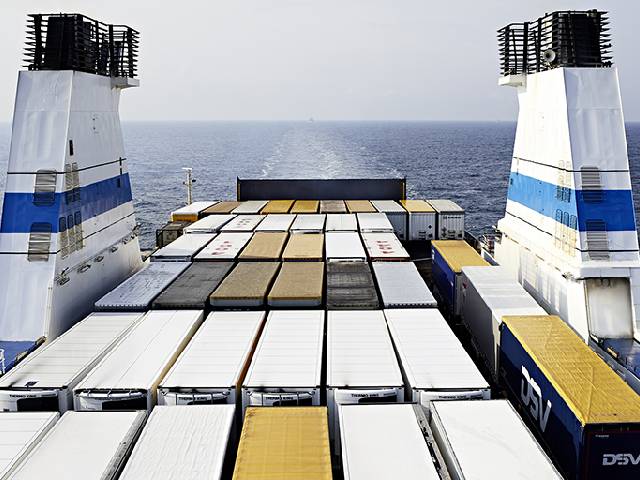 For more than 70 years, Finnlines has played an essential role in integrating Finland with the rest of the Europe and Russia and increasing the prosperity in our country. With good seamanship and long term focus, the company has navigated through several economic storms during the years. In fact, thanks to these challenges, Finnlines is today in better shape than ever.

The current world crisis due to the Coronavirus pandemia has taken the world by surprise and challenged governments, societies and economies globally. Whilst ensuring the safety of its citizens, it is just as important to safeguard the supply of food, medicine and other consumer goods to each country. Finland’s island-like location, and its dependence on sea transportation require frequent and regular liner traffic services. This is nothing new to Finnlines, being the most important player providing maritime transport of rubber-tyred vehicles, i.e. lorries and trailers to and from Finland. In fact, Finnlines alone transports more than one third of the roughly one million trucks moving over the three main sea bridges, Finland–Estonia, Finland–Sweden and Finland–Germany, which are connecting Finland to the rest of Europe.

One could ask why has Finnlines then remained so unknown for the citizens of Finland? The answer is quite simple. Whereas other commercial operators such as passenger car ferry operators mainly focus on recreational travel and spend tens of millions of euro on marketing their offerings, Finnlines, in turn, focuses on freight and travellers of necessity. The need for our services is not dependant on tax-free exemptions or entertainment on board but rather on the general economy and the integration of Finland’s 5.5 million population with the rest of Europe. This makes our business more vital for the Finnish society, more stable but less known to the general public.

Finnlines has a fleet of 21 vessels, of which all vessels connecting Finland to rest of Europe sail under the Finnish flag. Finnlines vessels run and perform their duties as usual even in the exceptional situation we are facing now. Finnlines, as one of the Finland’s largest sea freight operators, ensure there is enough sea freight capacity to prevent disruption to the flow of goods, and its routes and schedules are tailor-made for rubber-tyred vehicles.

A substantial number of rubber-tyred vehicles between Finland and Sweden is carried on Finnlines’  Naantali–Långnäs–Kapellskär route. With close to 30 departures each week, Finnlines is the leading freight carrier with a market share of over 40% on this maritime bridge.

Between Finland and Germany, Finnlines’ Helsinki–Travemünde route is a very good example of a tailor-made service. With punctual morning arrivals and early evening departures every day to and from Helsinki, it has manifested its position as Finland’s most important rubber-tyred service when analysing Finland’s export and import volumes.  Around 40% of all rubber-tyred vehicles between Finland and Germany are carried on this route and it represents the only direct maritime service for passengers between Finland and Continental Europe. In addition, Finnlines’ ro-ro services cover the Finnish ports of Uusikaupunki, Turku, Hanko, Helsinki and Kotka offering connections to other European ports.

“Finnlines has a vital role in transporting critical goods, such as medicine, food supplies and other consumer goods, which are essential for Finnish people and industry. Our services are specialised for freight and they play a key role in the smooth flow of supplies. For example, the current vessel operating between Finland and Sweden i.e. Naantali and Kapellskär, MS Finnswan, can carry a considerable amount of cargo – up to 200 trucks per voyage, equalling the combined rubber-tyred capacity of four passenger car ferries providing daily sailings between Turku and Stockholm” says Tom Pippingsköld, CFO, Finnlines Plc.

The development of a pioneering company like Finnlines has been a long-term effort. During the past years, Finnlines has concentrated on strengthening its core business operations and developing environmentally friendly solutions for maritime traffic. Regular high frequency traffic between Finland and the rest of Europe will continue to be the foundation of Finnlines’ operations as well as continued investments in sustainability.

Environmental responsibility is part of Finnlines’ business strategy. Reducing fuel consumption and cutting harmful emissions have been one of the key elements of its strategy for a long time. Finnlines will reduce its CO2 emissions by investing in energy efficiency and green technology and by reducing fuel consumption. On top of this, Finnlines is investing in new environmentally friendly vessels to cut emissions further.

The world’s greenest ro-ro vessels are currently being built to accommodate sustainable development. These ultra green vessels will be built with the latest technology available to ensure the lowest CO2 emissions. For example, they will be equipped with lithium-ion battery systems that enables zero-emission operations in port. The first ro-ro vessel is expected to start operation as early as next year, and the other two in 2022.

In addition to this, Finnlines has also ordered two giant Superstar eco-efficient ro-pax vessels, which will pioneer in honouring green values. They are designed to provide maximum efficiency and the seamless transfer of cargo and passengers. Ultra green Superstar ro-pax vessels will lift the maritime bridge between Finland and Sweden to the next level, while keeping in mind the importance of a vital sea connections from Åland Islands to both mainland Finland and Sweden. The Superstar vessels – starting in traffic 2023 – will take up to 1,100 passengers, 200 cars and 250 trucks per voyage.

“The new vessels will help Finnlines strengthen its market-leading position in its core business – rubber-tyred cargo traffic – and increase its share of passenger traffic especially in the Finland–Sweden traffic. In addition, the environmental footprint of each carried passenger or truck on this bridge will reduce significantly from current level, being already the smallest footprint of all available options. The total investment is EUR 0.5 billion. It is one of the most significant investments recently published by Finnish companies and is a key part of the sustainability measures we are taking to achieve our long-term goals to renew the fleet further – younger ships bring higher environmental standards to grow together with our customers in a sustainable way,” says Pippingsköld.

The National Emergency Supply Agency (NESA) in Finland is prepared to spend EUR 45 million on financial support to ensure the transport of vital cargo from Finland to Sweden, Baltic countries and Continental Europe. The state acts responsibly and proves that the national arrangements for the security of supply in Finland are agile and strong.

Finnlines welcomes this decision, especially because Finnlines is the key operator carrying around 34% of all rubber-tyred vehicles even when combining the number of vehicles carried on these three critical maritime connections into and out of Finland i.e. Finland–Sweden, Finland–Germany and Finland–Estonia. Finnlines is the market leader in rubber-tyred maritime traffic in the Baltic Sea area and provides regular high frequency traffic to both private and public sector, and for example, between Finland and Sweden, Finnlines provides its service in a way that is the most cost-efficient and, also with the lowest CO2 emission per transported rubber-tyred vehicle.

The National Emergency Supply Agency has already granted financial support to four out of seven commercial operators securing the main maritime bridges for rubber-tyred vehicles. The first support actions taken by NESA where addressed to commercial passenger car ferry operators whose operations are not viable without revenue from recreational travellers. For more freight oriented operators, the threat of serious disturbances was less imminent. However, the corona crisis is having a strong impact in Finland’s economy and the value added of the transport sector is estimated to fall by around 20%, to which Finnlines is also exposed to. After several weeks of negotiations and encouraged by NESA, Finnlines has also filed an application under this same emergency financial support programme.

Finnlines is still waiting for NESA’s emergency financial support decision but feels confident in receiving support based on Finnlines’ pivotal role in securing Finland’s security of supply in this important rubber-tyred traffic. Companies that operate in the same sector and compete with each other should have uniform and equal opportunities to apply for and receive financial aid granted by the State and authorities. Non-discrimination and ensuring fair conditions of competition are the basic principles of EU State aid rules. The key goals are also included in the Temporary Framework for State aid measures to support the economy in the current Covid-19 outbreak published by the European Commission on 20 March 2020.

“Finnish public-private cooperation is exceptional from an international point of view. It is important that the National Emergency Supply Agency sees the value of the main maritime connections between Finland–Sweden, Finland–Germany and Finland–Estonia. Finnlines’ fleet and services in itself ensure Finland’s security of supply. We offer more than 170 departures each week, into and out of Finland, with a fleet of 21 ships. We intend to remain as dependable and as reliable as ever in this exceptional situation we are currently facing” says Pippingsköld.