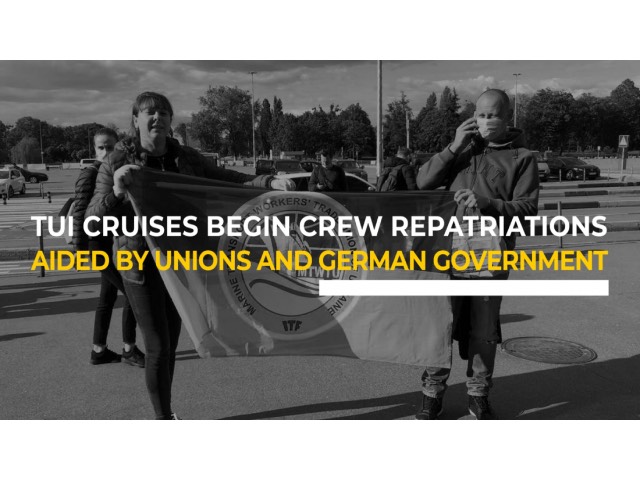 Repatriations have started for the crew of TUI Cruises Mein Schiff 3 on charter flights from Germany aided by the International Transport Workers Federation (ITF) affiliated seafarers’ unions, the German Government and the seafarers’ mission in Germany.

After passengers disembarked the cruise ship Mein Schiff 3 on March 23, the company transferred seafarers from several of their other ships onto the Mein Schiff 3 and sailed to the German port of Cuxhaven in order to commence repatriations. The ship docked in Cuxhaven on April 28, however on April 30 an outbreak of Covid-19 was detected on board leading the company to quarantine everyone on the ship.

After weeks of intense discussions with the company, Maya Schwiegershausen-Gueth from ITF affiliate in Germany ver.di assisted by the German ITF Inspector Hamani Amadou were finally able to assist repatriation of approximately 1,200 of the 2,900 seafarers on Friday, May 8.

“It has been extremely frustrating and infuriating that neither the company nor the flag state have taken their responsibility seriously. The seafarers are desperate to return home and they have a right to do so. Luckily the German government has been supportive throughout, without their assistance and the help from the mission, the situation could have quickly escalated on board” said Schwiegershausen-Gueth from ver.di.

Fifteen crew members who exhibited Covid-19 symptoms were tested and nine came back positive. The infected seafarers were quarantined, but unfortunately due to the lack of a clear pandemic strategy from the company prior to transferring over 3,000 seafarers from six different ships on to Mein Schiff 3, the crew were unnecessarily exposed to the pandemic which caused high levels of anxiety for the seafarers.

ITF has confirmed that repatriation flights have chartered Ukrainian (168 seafarers), Indonesian (738 seafarers), Turkish, Tunisian, Mauritian and Chinese crew members home. More charter flights are planned next week for around 1,200 seafarers from the Philippines, Nicaragua and Honduras. Sadly 192 Indian seafarers remain on board without any prospective travel date and limited support from their government.

MTWTU first vice chairman Oleg Grygoriuk told the ITF today that, “All of the repatriated seafarers who tested negative to Covid-19 are now home, which is an enormous relief for all of our members and their families. We have worked with the company to guarantee the safe transit of crew from Cuxhaven to Odessa, and with the Ukrainian Government to ensure that they weren’t forced into medical facilities for quarantine on their return home.”.

“All seafarers who have returned from Germany have been advised to use the ‘Act at Home’ app and have been allowed to isolate at home for the observation period. We will continue to stay in touch with them,” he added.

“The ITF and our affiliates thank all involved in getting the Mein Schiff 3 crew home. We have been working closely with UN agencies and the industry to develop a roadmap on how governments can facilitate the safe movement of seafarers and provide immediate exceptions from any national Covid-19 restrictions to seafarers as ‘key workers’  to allow repatriations and crew changeovers,” said Smith.

The commitment and coordination between the German Government, the seafarers’ mission and the maritime unions in this case is an important example for governments and the industry worldwide on how this can be done, but it also emphasises the need for companies and flag states to be more responsible for their seafarers and treat them with the basic respect they deserve.

“The heart-breaking report over the past two weeks of crew members ending their lives while waiting to be send home underlines how important certainty is for the tens of thousands of seafarers currently awaiting repatriation. We urge governments globally to follow the lead of Germany and act now and get seafarers home,” said Smith.