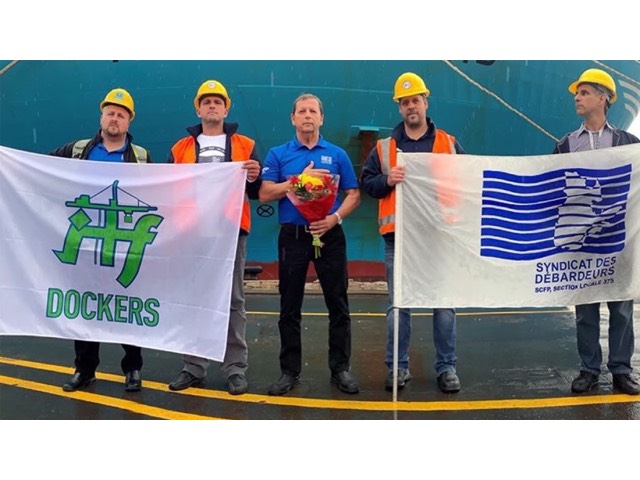 This week marks a year since Ravindu Telge, 2nd  Officer of the Maersk Patras, fell overboard while lashing underway along the Saint Lawrence Seaway, in Quebec, Canada.

Securing and unsecuring containers onboard moving ships is highly dangerous work that the Canadian Union of Public Employees and the ITF have condemned — and have repeatedly warned the Port of Montreal and Transport Canada against allowing.

The day he was killed, Brother Telge had worked his usual midnight-to-04:00 watch. Later the same morning, he was called to do a shift of hard labour on deck. Container ships calling at Montreal are required by terminal operators there to unlash all containers and loosen twistlocks before arriving in port, to save the port time and money. This means the seafarers whose actual job is to maintain and navigate the ship, are pressed into stevedoring work in addition to their own work.

Had Brother Telge completed this task, he world have then gone back on navigation watch at noon. Instead, at about 09:00, Brother Telge fell over the rail to his death while holding a four-metre lashing bar.

The ITF is awaiting a copy of initial findings from Transport Canada. To its shame, Canada’s Transportation Safety Board, the national authority that investigates marine accidents, refused to exercise its mandate. Instead, it has left the responsibility to the flag state of Singapore, where the vessel was registered, removing any chance that Transport Canada learns any of the required lessons from this incident to prevent any future risk to the lives of seafarers in their waters.

In a grim twist of fate, the Maersk Patras called at Montreal on the first anniversary of Brother Telge’s death. Today, Dockers’ representatives from CUPE Local 375, accompanied by ITF Inspector Vince Giannopoulos, boarded the vessel to inform the Captain that the port workers wished to honour their brother’s loss and offer gifts to the crew. The Captain and crew agreed to join the longshoremen on the dock for a brief ceremony.

“This has always been about the seafarers. They have a hard enough job already. In the winter, the weather can be -30 Celsius. Lashing is a dangerous job. We know it is hard work. We don’t think it is fair that BrotherTelge should give his life to do work he should not be doing. We wish his family respect and hope that they will be able to find peace.

Ravindu was 31 when he died, he would have been 32, two days, ago on May 17th. He will never turn 32 now. We can only imagine the grief of his family at home in Sri Lanka.”

Sylvain Charron added: “I hope his family will know that CUPE 375 will not forget his loss — and we will continue to fight for seafarer safety on vessels coming to our port.”

ITF Canada Coordinator Peter Lahay said  “We have done our homework. We know that the strain put on crew to lash is done to save the industry a few dollars.

“We have expressed this to the Port of Montreal and to Transport Canada. They don’t seem to care about the seafarers doing this dangerous work. They seem content to have this cruel and dangerous practice continue. Ravindu was a young seafarer who needlessly gave his life. He had no choice. That’s the way it is on ships: you either do the work or you are invited to go home.”

“Seafarers are highly exploitable and prone to doing dangerous work like lashing. Nothing is crueler than operators who takes advantage of that. This practice must be stopped.” said Peter Lahay.

Remember the dead and fight like hell for the living.