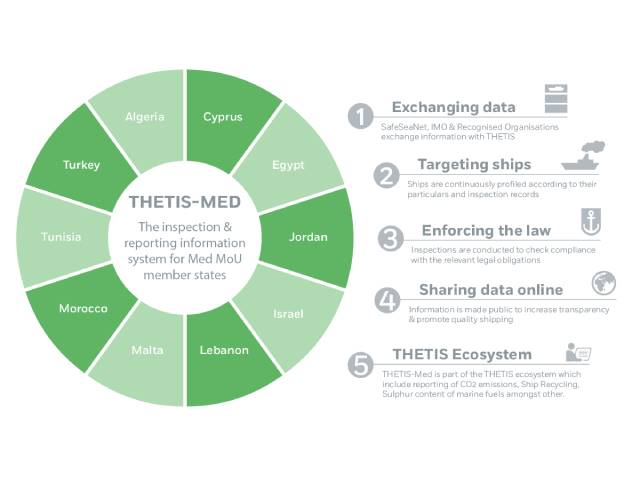 THETIS-Med went live this month in what is seen as a milestone in the EU’s efforts to foster regional cooperation among Mediterranean countries. This new information system supports the members of the Mediterranean Memorandum of Understanding on Port State Control (Med MoU). It marks the beginning of a new era on how ships are targeted for inspection in the Mediterranean region, how these inspections are recorded, and how the results are made available for the exchange of information between EU and non-EU countries which are members of the Med MoU (Algeria, Cyprus, Egypt, Israel, Jordan, Lebanon, Malta, Morocco, Tunisia, and Turkey).

Since March 2017, EMSA has been implementing the “EuroMed Maritime Safety” project, funded by the European Commission (DG NEAR) and commonly known as Safemed IV. This project aims at fostering regional cooperation among Mediterranean riparian states, while at the same time providing technical assistance to enhance maritime safety, pollution prevention, security and labour conditions on board ships. A harmonised approach to PSC activities in the beneficiary countries of the Safemed IV project will enhance the maritime safety standards in the region and will prevent distortion of competition between operators and ports.

One of the key elements for the successful implementation of PSC activities at regional level is the introduction of an effective and user-friendly information system. In the framework of the Safemed IV project, EMSA was tasked to develop such a system, following a request made at the 19th committee meeting of the Med MoU in October 2017 in Cyprus. The THETIS-Med system will support Algeria, Cyprus, Egypt, Israel, Jordan, Lebanon, Malta, Morocco, Tunisia, and Turkey, in the execution of their obligations with respect to PSC inspections. THETIS-Med modernises the way ships are targeted in the Med MoU, it simplifies the recording and online availability of inspections reports, and it further aligns the procedures and modus operandi with the Paris MoU by increasing cooperation between EMSA, the EU member states and Safemed IV beneficiary countries.

“We are pleased to announce the new THETIS-Med system for port state control inspections. Its very existence is proof of the close cooperation among all the Mediterranean countries involved. While the system clearly strengthens the international maritime legal framework, it is also beneficial for certain EU countries which are members of other MoU as it removes the need for double reporting,” explained EMSA’s Executive Director, Maja Markovčić Kostelac.

THETIS-Med can handle thousands of inspections a year and combine port notification information with ship particulars and inspection details in near real-time, including a target factor for each ship in port and updates their performance. THETIS-Med also provides PSC Officers with a direct link to RuleCheck, a decision support tool developed by EMSA that contains an up-to-date repository of international and EU maritime legislation. While EMSA is responsible for the hosting the system and providing helpdesk support to users, the Med MoU Information Centre (CIMED) in Casablanca will act as the regional administrator of THETIS-Med.