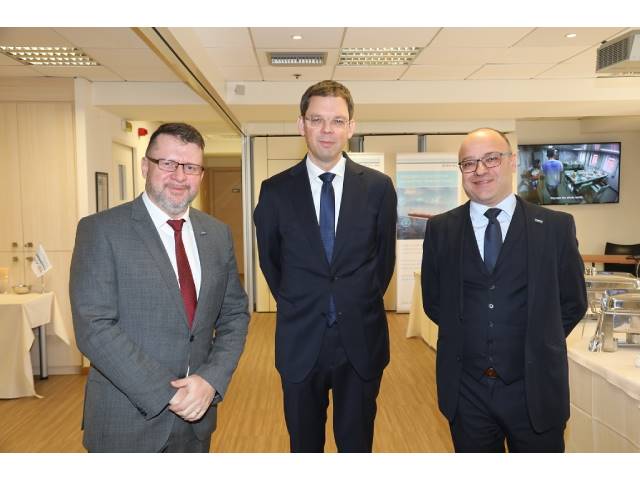 His Excellency, the Norwegian Ambassador, Fronde Overland Andersen, DNV GL’s honoured guest, made the announcement of the Regional Maritime Gas Centre. The new group could draw on many highly competent DNV GL experts covering the whole range of gas services and disciplines and would be targeted towards boosting the region’s growth in the challenging gas segment, while supporting local markets, he said.

Ioannis Chiotopoulos proceeded with a presentation on DNV GL’s core initiative of launching Greece as a home market. He pointed to the global network of Greek speaking employees and the reinforcement of the Business Development Team, through the addition of three Business Development Managers. Furthermore, he noted the intense focus on the Research and Development Department and the continuing investment in the Piraeus offices, in order to better support customers and the maritime community. As part of this effort, new roles have also been created within the region. Finally, he announced the launch of a new study on the enhancement of the Greek Flag.

Leonidas Karystios, Regional Business Development & Gas Segment Director, presented DNV GL – Greece’s Market share in terms of number of vessels and gross tonnage, demonstrating significant growth over the last four years. In 2016, 711 vessels representing 32.80 million GT were with DNV GL – Greece, at the end of 2019, this had grown to 802 vessels and 41.45 million GT, he noted. The share of newbuilding contracting in the region and specifically in Greece has also been growing, he said, with over 27% of Greek owned vessels contracted to DNV GL classification (23% in terms of GT). Karystios, also highlighted several successful projects and a large increase in the number of vessels already in operation joining DNV GL class in Greece.

Jason Stefanatos, Business Development Manager, offered some insights on the organization’s digital services. DNV GL’s DATE (direct access to technical experts), Smart Survey Booking, Remote Survey, and Electronic Certificates, among others, were presented, showing how DNV GL’S commitment to leverage the power of digitalization was resulting in concrete benefits to customers in terms of response times and especially costs. He also looked at the possible development and impact of additive manufacturing on the shipping industry and DNV GL’s initiatives in this area.

George Teriakidis, Area Manager Eastern Mediterranean & Black Sea, presented the Maritime Forecast to 2050, a part of the Energy Transition Outlook (ETO) report, produced by DNV GL. This report provides guidance regarding the environmental challenges ahead, highlights major trends, and offers insights on the rapidly changing global energy landscape. The heart of this study is the alternative strategies and pathways the world fleet and industry could take towards decarbonization.