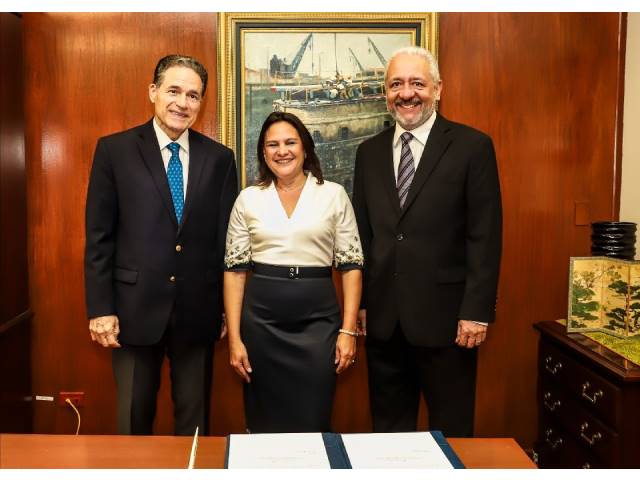 Ilya Espino de Marotta took office today as Deputy Administrator of the Panama Canal, making history as the first woman to ever hold the position.

Mrs. Espino de Marotta began her career at the Canal in 1985 as the sole female engineer on the shipyard. She now works alongside more than 1,000 women and recently served as the Vice President of Transit Business and the Executive Vice President for Engineering during the Panama Canal Expansion Program.

“Ilya skillfully oversaw the construction of the Expanded Canal, leading the waterway into a new era for global shipping,” said Panama Canal Board of Directors Chairman Aristides Royo.

“It is a great honor to work alongside a visionary such as Ilya, and I am certain that she will continue leading the Canal into a new decade of inspired innovation,” said Panama Canal Administrator Ricaurte Vásquez Morales.

Mrs. Espino de Marotta began her career in the waterway in 1985 and has more than 30 years of experience at the Panama Canal. Before her appointment to Deputy Administrator, she was the Vice President of Transit Business and led the Panama Canal Expansion Program as Executive Vice President for Engineering. She also served as the Executive Manager of Resources Management and Project Controls before the Expansion Program.

Mrs. Espino de Marotta earned a bachelor’s degree in Marine Engineering from Texas A&M University. She earned her master’s degree in Economic Engineering from the Universidad Santa María La Antigua in Panama City, Panama. She participated in the Executive Development Program at INCAE Business School and Northwestern University’s Kellog School of Management and has a project manager certification from the Project Management Institute.