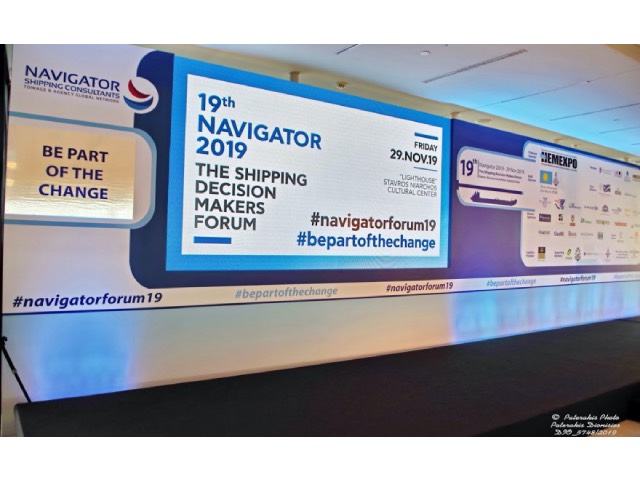 The 19th NAVIGATOR 2019 – THE SHIPPING DECISION MAKERS FORUM was organized by NAVIGATOR SHIPPING CONSULTANTS with great success on Friday, November 29, 2019 at the “Lighthouse” of the Stavros Niarchos Foundation Cultural Center.

The response to the call to the maritime industry to #bepartofthechange was impressive with the participation of more than 600 including high-ranking stakeholders from the entire shipping spectrum – shipping executives, representatives from maritime organizations, journalists, Embassies, academics and students from Universities as well as from the Merchant Marine Academies of Oinousses, Hydra and Aspropyrgos.

Danae Bezantakou, CEO of NAVIGATOR welcomed the participants underlining that this Navigator Forum 2019 is the result of discussions and meetings which took place on a monthly basis in collaboration with the Advisory Board, composed by most of sponsors and speakers of the Forum. The Advisory Board is the forerunner of a shipping think tank that pledged to be institutionalized with NAVIGATOR ASSEMBLY, which firstly was addressed to Shipowners of 1-15 ships. The results of the 8 discussion topics related to NEW REGULATIONS, SMART SHIPPING, HUMAN ELEMENT, LEGAL & INSURANCE, GREEN FINANCING, PORT STATE CONTROL, COMMERCIAL, SUPPLY CHAIN ​​were presented during the forum by the respective moderators.

The President of NAVIGATOR, Capt. Dimitris Bezantakos, was referred to the volatile period of the global shipping and economy, which creates a puzzle of strange social phenomena, such as terrorism and malicious acts on ships and installations, leading to a trampoline of oil prices. He also referred to the new regulations the problems that their implementation will cause and the major changes that are taking place in the tug- boats’ market in Europe and beyond.

The Minister of Maritime and Island Policy, Ioannis Plakiotakis, coming back from the IMO Assembly session in London, explained how he pointed out the weaknesses of the new regulation and asked for an extension of the measure, but received no answer. He also referred to the signing of maritime agreement with Japan, after 120 years of the latter’s signing and expanded on the new era in which Greece-China relations have entered and are developing. The Ambassador of Japan, the second shipping power in the world, H.E. Yasuhiro Shimizu, was present at the Forum as he participated as a speaker during the week of the 120th anniversary celebrations of the Greek-Japanese diplomatic relationships.

The Deputy Foreign Minister for European Affairs, Miltiadis Varvitsiotis, pointed out that this the great power of the European shipping and of course, of the Greek shipping, which accounts almost 60% of the European fleet, needs to be utilized further by Europe in order to achieve its goals as the first commercial partner among 71 countries in the world and the first financial power in penetration – ahead of the US and China.

To the question “how technology will help Greek Shipping going forward”, the answers given were through the conversion of physical information / data into digital, digitization and digital transformation. After sulphur cap 2020, digitization is the new upcoming trend and we have to embrace it. As for digitization, it has been noted that we cannot avoid it, but we need to be vigilant, understand the cyber security risks and learn how to protect ourselves. “Smart technology on the other hand, which enhances the communication between onboard crew and the company ashore, will be much more evolved.

Reference was made to China’s “entry” into the wider region of the Southeastern Mediterranean which has changed the bipolar balance of forces and interests as was known by today between U.S.A and Russia today, creating a triangular “coexistence”, which does not lack of competition.

Discussions have been also about Greece’s strategic location and strategic plans taking place in the Country’s two largest ports, Piraeus and Thessaloniki. It was also mentioned that COSCO is strengthening its commercial power thanks to them as a gateway to 36 other ports throughout the world. It has been underlined that the Balkan countries would become “European” sooner or later, and these two Greek ports would help to upgrade the Balkans and the Greek economy, with a real potential for Greek shipping activities. The port of Alexandroupolis and the port Kavala, are the next two ports that the government will seek strategic partners and have already attracted the interest of investors.

Europe must protect itself in the context of the ‘game’ taking place on the world map, gaining strategic autonomy in everything including the sector of technology.

Ioanna Prokopiou said that speed reduction and power limitation are temporary solutions. It is something that we should promote until technology evolves and decarburization solutions that meets IMO goals will be developed. Moreover, all stakeholders should keep in mind that when talking about new fuels there should be a holistic approach to their application from all sides (production, application, etc). Ship batteries, are not the current solution, until they will become more efficient, because they should occupy 70% of the ship’s capacity for a transatlantic journey!

Alex Hadjipateras underlined that there is no one golden solution for IMO 2020: It will have to be a mixture of clean fuels (e.g. LPG) and better engine management. He also mentioned that the train has left the station and we risk getting left behind. Banks are increasingly signing on to the Poseidon principles. Investors of public companies are concerned about sustainable investing and the environmental footprint of the companies they buy stock in and our customers, major oil companies and traders are keenly focused on open reporting about consumption for every voyage.

The closing remarks were addressed by Dr. Kostas Rokkos, President and CEO of TST International, summarizing key elements on the Market Trends, the IMO 2020 Sulphur Cap, the Human resources dimension, digitalization, legal aspects and some indications on the Future.

In addition this year, as an engagement of the NAVIGATOR SHIPPING CONSULTANTS Corporate Social Responsibility program, a part of the proceeds will be allocated as a contribution to Greek Shipowners’ Social Welfare Company “SYN-ENOSIS”.

We are already looking forward to welcoming you in the 20th NAVIGATOR 2020 – The Shipping Decision Makers Forum, which will take place in Chios Island during fall 2020.