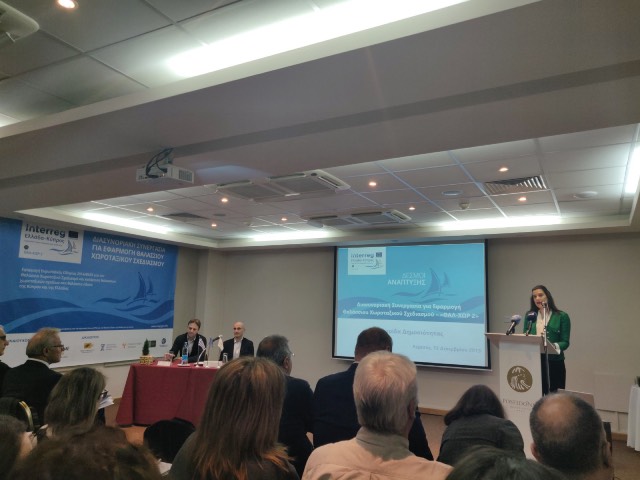 In an official meeting held on 12th of December, the Shipping Deputy Ministry presented the project “Cross- Border Cooperation for the implementation of the marine spatial planning” with the acronym “THAL – CHOR 2”, a strategic project for Cyprus and Greece.

The project is part of the Directive 2014/89/EU for the implementation of the marine spatial planning as well as of the policies related to the protection and management of the maritime environment and costal zones promoted by European Union,  such as the Integrated Maritime Policy, the Maritime strategy framework directive and the “Protocol on Integrated Mediterranean coastal zone management”.

In addition, the project is in line with the European Union’s strategy for the “Blue Growth”, which its objective is the enhancement of the dynamics of the blue economy, in critical sectors for the Cypriot and Greek economy, like shipping, fishing, energy and also the sea and coastal tourism.

In her welcoming remarks, the Shipping Deputy Minister, Natasa Pilides mentioned that the Shipping Deputy Ministry will follow strictly all the procedures provided from the relevant law, for a sustainable development in the maritime waters of the Republic. She added that by applying an ecosystem- based approach, which will taking into consideration all the economic, social, environmental and cultural aspects that exist, will ensure a good level of environmental status of Cyprus’ maritime space.

At the same time, she pointed that the Shipping Deputy Ministry invests in cross-border projects related which have been involved in co-founded projects with great success and significant results for the ministry and the Republic of Cyprus in general.

As part of the project the following actions were announced:

The marine spatial planning is one of the basic instruments of the integrated maritime policy of the European Union and is an important instrument for the sustainable development of maritime zones and coastal regions, while at the same time contributing to the objectives of ecosystem- based management in accordance with directive 2014/89/EU framework for maritime spatial planning.

Finally, it is noted that the marine spatial planning is defined as a public process of spatial and temporal analysis and distribution of human activities in marine areas to achieve ecological, economic and social objectives. Its outcome is a “maritime spatial plan” that prints the vision of each nation for the exploitation and sustainable development of its maritime space.