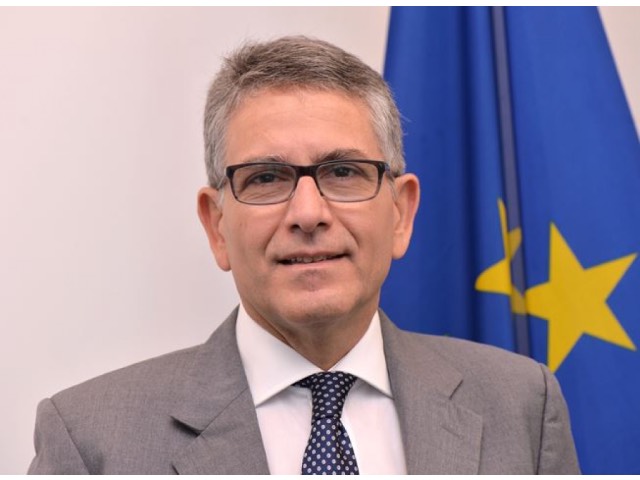 Your excellences,
Ladies and Gentlemen,

It is a great pleasure for me to address this distinguished audience.

It is no secret that the Greek Government is pursuing an extremely ambitious energy agenda in the context of the Paris Agreement, the Green Deal for Europe, and the commitment to a climate-neutral EU by 2050. Our strategic objective is to establish Greece as a regional energy hub in the Balkans and Southeast Europe.

A couple of weeks ago, we presented our National Energy and Climate Plan which is among the most ambitious National Plans in Europe. Our Plan provides for concrete measures and policies that will transform completely the Greek energy sector by 2030.

We are deeply convinced that implementing these policies will have a great impact in our society by stimulating the economy and generating growth and new jobs.

More specifically, over the next decade we intend to reduce GHG emissions by 42% from 1990 levels, increase the share of RES in the energy mix by 35% and increase the energy efficiency by 38%.

The cornerstone of our strategy is the full delignitisation of the electricity production by 2028, frontloaded to 2023. To that end, we are preparing a master plan for the socially fair transition of the lignite regions of Western Macedonia and the Peloponnese. We plan to give special incentives to attract private investments in these two regions.

These targets go even beyond the ones agreed at EU level and place Greece at the forefront of the energy transition and the fight against climate change.

The implementation of our energy strategy will create huge investment opportunities. Over the next decade we are expecting to make investments of around 44 bn Euros, which will add value to our economy and create at least 60,000 jobs.

Despite the fact that we are still a relatively young government, we have already proven that we have the political will, tools and methods to accelerate the implementation of necessary reforms and shape a truly business and investment friendly environment.

Such an example is the recent law for the modernization of PPC. For many years, the structural issues of PPC (dating from the time when it was a State monopoly) were a taboo subject that no government wanted to be associated with. We moved forward in a decisive way to free the company from sclerotic procedures of the public sector, which undermined PPC’s competitive position. PPC can now adjust its cost base and hire professional managers which will oversee its ambitious foray to the Renewables Sector and the digitalization of the Electricity networks. Its corporate governance was also strengthened. On the other hand, PPC must from now on learn to live without the support of the State and compete within Greece and expand outside Greece.

In order to make a success out of the energy transition, we need investments not only in the Renewables where we expect the development of RES projects of 8 GW by 2030, but also in the natural gas and electricity sectors.

A concrete example is the DEPA Infrastructures privatization announced today. The relevant provisions were voted on November 28th, and today the Invitation for the Express of Interest was launched. The company foresees in its 2019-2023 distribution networks investment program, investments of approximately 380 mil. Euros, which will be accelerated and expanded.

Following the express of interest for DEPA Infrastructures, the launch of a second International Tender for the sale of 65% of the share capital of DEPA Commercial SA, the major wholesaler and retailer in Greece, is expected by January 2020.

Furthermore, we move forward with the development of strategic infrastructure projects such as the Alexandroupolis FSRU and the Kavala underground gas storage facility (early in 2020), both vital infrastructure projects that facilitate the penetration of US LNG into the Greek market. We are also working intensively for the promotion of the East Med Gas Pipeline.

The Greek part of the TAP pipeline has recently been completed and the European part of the Southern Gas Corridor has been connected to the TANAP part, which runs through Azerbaijan and Turkey. Furthermore, the construction of the IGB, the Bulgaria-Greece gas interconnector has begun, making the prospect of exporting gas from the Alexandroupolis LNG terminal to the north through Bulgaria and Romania a reality within the next 2-3 years. We are placing renewed emphasis on all those projects, which promote the diversification of gas routes and sources and the security of supply of Greece and the region of Southeastern Europe.

An important priority for the Government is to modernize our electricity sector. To this end, we seek to further privatize the electricity Transmission System Operator (IPTO), and to privatize in part the Hellenic Electricity Distribution Network Operator (HEDΝΟ).

The amount of around 13.4 bn Euros is expected to be invested by 2030 in the gas and electricity networks. We need rapid digitalization, development and expansion of our networks and private funds are essential in order to achieve that goal.

Your Excellences,
Ladies and Gentlemen,
The Climate Crisis provides us with no luxury of time – we need to act now. The energy transition is not an option but the only way forward. We are either going to adapt our economies to this reality or fail to complete our duty to the next generations.

We see this as a great opportunity rather than as a cost. From our part, we are undertaking all the necessary steps in order to attract the investments we much need. Our message is loud and clear: Investing in the Greek energy sector is a win-win situation. Let’s make it happen.