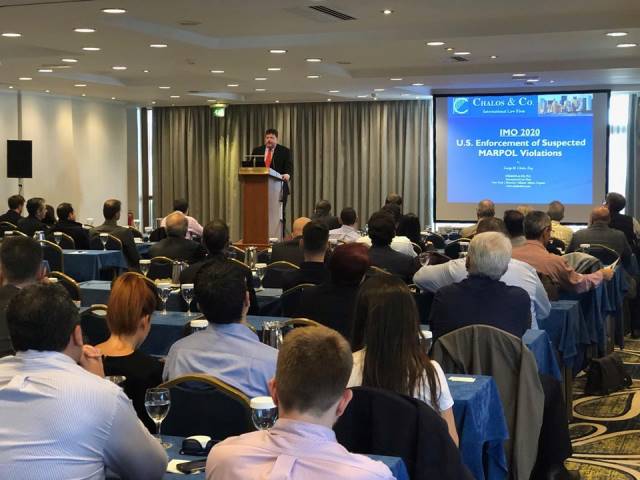 The shipping industry has been preparing, or perhaps more aptly termed: bracing, for the implementation of IMO 2020 and the worldwide requirement for commercial vessels to consume fuel with a 0.5% sulfur content or less. As the deadline for use of compliant low sulfur fuel draws near, it is important to consider how the largest environmental regulatory regime in the world, the United States, is likely to treat enforcement.  MARPOL Annex VI is aimed at preventing air pollution from ships, with a primary goal of limiting the main air pollutants contained in ships’ exhaust gas, such as sulfur oxides and nitrous oxides. It also established Emission Control Areas (ECAs) which include the Baltic Sea; North Sea, coastal U.S. and Canada and the U.S. Caribbean Sea (around Puerto Rico and the U.S. Virgin Islands).  In these special areas, the sulfur limit has been capped at 0.1% since 2015.  A complementary “carriage ban” enters into force on March 1, 2020, which will prohibit vessels subject to the IMO 2020 regulations (except those equipped with exhaust gas cleaning systems, i.e. – scrubbers), from carrying noncompliant fuel onboard for any reason.  The International Maritime Organization has made clear that IMO 2020 and the carriage ban will not be delayed and/or pushed back.  Non-compliance will have serious consequences.

MARPOL has been implemented (and is enforced) in the United States through the Act to Prevent Pollution from Ships or “APPS”.   APPS and U.S. regulations apply to all U.S.-flagged ships anywhere in the world and all foreign-flagged vessels calling at a U.S. port or terminal or while operating in U.S. navigable waters, the U.S. ECA and/or the Exclusive Economic Zone of the United States.  The U.S. government routinely takes direct enforcement actions against Owners, Managers, and crewmembers of foreign flagged vessels alleged to have violated MARPOL, APPS, and U.S. regulations.  The actions can be administrative, civil, and/or criminal in nature.   As part of its port state authority, the Coast Guard is authorized to review vessel records and documents maintained onboard to ensure compliance.  Although MARPOL anticipated that port states which discover suspected violations may refer the matter to the Vessel’s Flag State Administration, the Coast Guard and U.S. government almost always elect to retain the investigation.  Since 1998, the investigation of alleged false records (mostly Oil Record Books Part I, which failed to record discharges of bilge water and/or sludge), has led to over two hundred (200) criminal prosecutions and the collection of nearly USD 1 billion  in criminal fines by the U.S. government.

Over 9,500 scheduled port state control exams, including Annex VI compliance checks, are conducted by the Coast Guard every year.  Since 2015, approximately 80 MARPOL Annex VI deficiencies have been documented by the Coast Guard and over a dozen enforcement actions have taken place.  In 2019, the first criminal prosecution of a MARPOL Annex VI violation was pursued by the Coast Guard and Department of Justice (DOJ).  In that matter the Owner and Operator of a foreign flagged vessel each paid a criminal fine of USD 1,500,000 for the use of non-compliant fuel above 0.10 % in the Caribbean ECA and the crew’s failure to accurately record the actual bunker transfers and consumption in the Oil Record Books onboard.   Similarly, it can be expected that the Coast Guard will be focused on ensuring vessel compliance with the new global sulfur cap starting in 2020 as part of its port state control inspections.

When analyzing the enactment and enforcement of IMO 2020 in the United States, it is critical to be aware of the Coast Guard and DOJ’s perception.  Senior Coast Guard officials have made clear that it is the agency’s belief that compliant fuel oil is not going to be a problem in 2020.  The failure to have compliant fuel on board of a vessel, will be viewed as a failure of preparedness, not a failure of accessibility of resources.  Parenthetically, the Coast Guard motto is “Always Ready.”  In addition, the DOJ perceives that there are vessels breaking the rules each day, and strongly believes in its mission to seek out noncompliance and prosecute alleged criminal activity accordingly.

To successfully demonstrate that a vessel is compliant with IMO 2020 regulations, shipowners and operators must ensure their vessels have the required documentation ready for port state control inspections. Critical records include:

The best practices for shipowners and operators to avoid any issues during inspections by the Coast Guard is to obey the law and applicable regulations and have good policies and procedures for IMO 2020 compliance in place.  Owners and Operators must know and manage the type of fuel which is being put onboard their vessels.  The failure to have compliant fuel onboard and/or false records hiding the non-compliant fuel will be viewed unfavorably by the Coast Guard.  Education of vessel officers on IMO 2020 requirements and making sure that all crewmembers are aware of a vessel’s non-retaliation and open reporting policies if they observe misconduct, is critical for a successful port call to the United States.