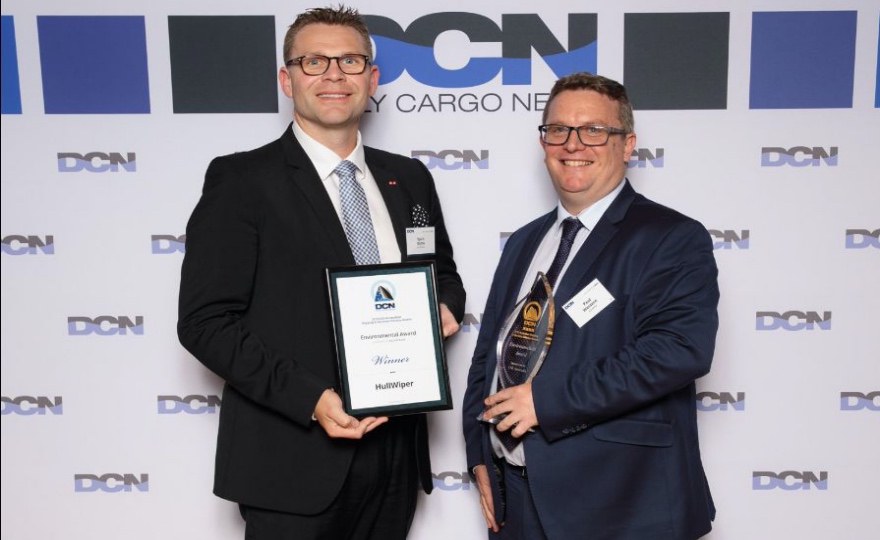 The accolade was presented at a ceremony in Melbourne, Australia, last week which brought together a diverse range of representatives from the shipping sector to recognise companies and products making significant advances for the Australian maritime community.

The award was presented to HullWiper for its initiatives and implementation of its operating system which reduces marine pollution and contributes to the environmental protection of Australian waters. The company’s underwater diverless- and brush-free cleaning technology uses adjustable natural seawater jets to dislodge and remove biofouling without the abrasive scrubbing or harsh chemicals employed by traditional methods.

The ROV collects marine fouling removed from hulls, rather than releasing it into port waters and risking the spread of invasive marine species. Captured residues are pumped into an onboard filter unit and deposited into dedicated drums onshore, which are collected by a locally-approved environmental waste disposal company, protecting both the marine environment and the customer from potential fines or penalties. As a bonus, as no divers are involved, the ROV also saves costs and reduces the risk to human life.

HullWiper’s Managing Director, Simon Doran, says: “Protecting our fragile marine environment is a key focus for HullWiper and what we stand for. It is therefore an honour to receive this recognition from our industry peers for HullWiper’s achievements in the land down under.”

Since its launch in late 2013, HullWiper has expanded from its first base in Dubai to include key locations across the Middle East, as well as ports in Sweden, Norway, Denmark, Singapore, Spain, Egypt, Australia and – most recently – Panama and Mauritius. Plans are in the pipeline for new locations including Sri Lanka, Korea, South Africa, Chile and Bahamas. HullWiper is also available for lease where the company does not have its own base.

To date, HullWiper has attended more than 900 vessels for hull cleans worldwide.