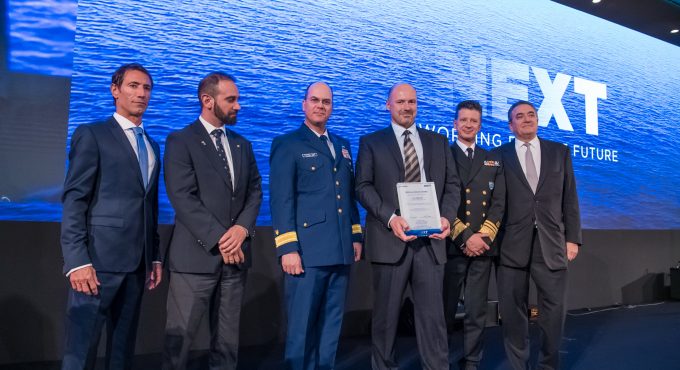 V.Ships have demonstrated they are leading the way in creating a safer industry with expert and quick-thinking crew. In recognition for their dedication, the V.Ships crew of the Venetiko has been rewarded with a Special Rescue Amver Award for their professional response to an unpredictable situation alongside V.Ships Greece receiving an impressive 39 Amver Awards during the 2019 ceremony.

Amver (Automated Mutual Assistance Vessel Rescue) is an international voluntary programme in which participants commit to protecting life at sea and assist vessels in distress. The Amver Awards recognise the heroic acts of seamanship by the crew of a participating vessel and Special Awards are presented for dramatic or exceptional rescues.

The Special Rescue Amver Award was presented to the V.Ships Captain Andriy Kyseleyov and the crew of the container vessel Venetiko after securing a distressed vessel and rescuing two fishermen whose boat ran into difficulties in the Caribbean in late August this year.

Costas Kontes, Managing Director for V.Ships Greece, said: “Our entire fleet participates in the Amver initiative and receiving 39 Amver Awards in addition to a Special Rescue Award emphasises how this humanitarian programme is so important in supporting other seafarers out at sea. V.Ships Greece were honoured to attended a round table lunch discussion with the representative of the U.S. Coast Guard Rear Admiral Richard Timme who attended the Amver Awards ceremony, to discuss the latest developments in shipping and the importance of collaboration in promoting safe and secure work practices and developing the systems that reinforce them.”

Graham Westgarth, CEO, commented: “At V.Group, we are committed to providing excellence on all levels and ensuring our staff are fully trained to thrive in all scenarios. This award acknowledges our crew development programmes and the crew’s ability to be both reactive and proactive. Credit goes to Captain Andriy Kyseleyov and his team for their efficient and skilled response and their dedication to safety out at sea.”