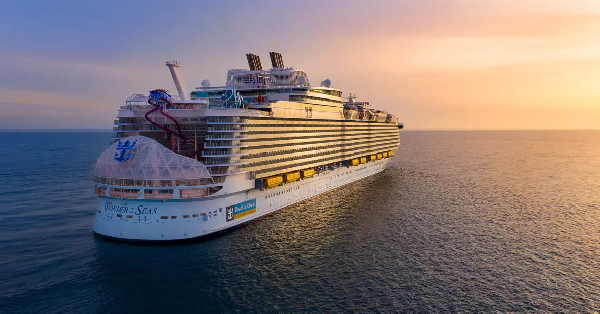 Ready to plan the perfect Royal Caribbean cruise vacation in 2023?

It may come as a surprise to first-time cruisers just how much goes into planning a cruise vacation. Sure, you can plop yourself at the pool everyday and call that a great break, but in reality, Royal Caribbean offers its guests so many great things to see and do that it can be overwhelming without a plan.

Think of this post as “Royal Caribbean 101,” with everything organized into the most important considerations of planning a cruise. This page is a jumping off point to give you some background information on each aspect of the cruise, with a ton of links to other blog posts that offer much more detailed information.

There wont be any new cruise ships debuting in 2023, but we’ll get very close to it.

Icon of the Seas will delivered in late 2023, with her first revenue sailing in January 2024.

Expect a lot of focus for Icon has she finishes construction on her way to start sailings.

Something that will open in 2023 is Hideaway Beach.

Royal Caribbean is expected to open its expansion of Perfect Day at CocoCay in late 2023. There isn’t a specific date yet, but it looks to be closer to the end of the year.

Few details are available on what this area will entail, but we do know it’s going to be an adults-only area.

Hideaway Beach will be complimentary, and located on the western end of the island adjacent to Thrill Waterpark.

Some other Royal Caribbean firsts for 2023 include:

The cruise industry has rolled back most of its Covid protocols in order to keep it line with other forms of leisure travel.

It’s important to note that protocols can change at any time, but with few exceptions, there is no need to be vaccinated, take a pre-cruise covid test, or wear a mask onboard.

The exceptions currently are:

You’ll want to check with Royal Caribbean before your cruise for the most up-to-date protocols. Keep in mind that protocols can change anytime, so check again in the days leading up to your cruise.

When to take a cruise

Many people are curious what time of the year is ideal for taking a cruise, as well as what the cheapest month to go on a cruise happens to be. There are many factors to the price of a cruise, including the month.

While we recommend the best times to book a Royal Caribbean cruise, considerations such as the school calendar, personal obligations, work schedule and more all narrow the window of time.  Still, it is important to be aware of the times of year to find lower cruise fares.

In general, you will find lower fares if you are willing to cruise during the “shoulder seasons” and/or when school is usually in session, such as these times of the year:

If you are looking for a cruise during other times of the year, the good news is Royal Caribbean will still run a fair share of promotions to help bring the cost down of its cruise.

If you follow cruise prices over any length of time, you will likely notice a number of different offers.  Each offer may focus on discounting one aspect of the cruise fare over another, but the important thing to remember is in most countries, you can re-price up until final payment date in the event the price drops.

In short, there is no bad time of the year to take a Royal Caribbean cruise.  Sailings are designed to be entertainment for guests regardless of what the calendar may say.  It is important to know that there can be peaks and valleys, in terms of demand and crowds in the ports you will visit, but the cruise experience overall is great year-round.

How long of a cruise should you choose?

The length of the cruise you should take depends on what type of vacation you are considering.  Are you looking for a weekend escape, or do you want to get away from it all?

If this is your first cruise, I recommend going on a five to seven night sailing on an Oasis or Quantum Class ship. Shorter cruises go by so quickly that you have little to get acclimated to what a cruise is all about. Ultimately, the exact length of your cruise may depend on how much vacation time you have and which ports of call you are interested in visiting.

Plus, Oasis Class ships have some of the latest and greatest features across the fleet. This includes Central Park, rock-climbing wall, surf simulator, and water slides.

Quantum Class ships have their own assortment of signature areas and activities, such as North Star, SeaPlex, sky diving simulator, rock walls, and excellent youth programs.

By going with a slightly longer cruise, you will have the opportunity to really explore the ship and enjoy the experience.  Shorter cruises go by so quickly and for someone new to cruising, it may not provide enough time on ship or on shore to really get a sense of it all. Moreover, on a per-night basis, the cost of a cruise tends to be cheaper the longer the sailing.

Royal Caribbean ships are designed to be destinations rather than just a floating hotel room, so you will want more time to experience it all.  I typically find cruises closer to a week in length provide a great balance of value, time and opportunity. It is understandable if you are at the mercy of work or school calendars, which limit how much time your cruise can be.

People that cruise a lot will always fly in at least one day before their cruise leaves and that’s to avoid travel nightmares that the airlines are notorious for. Delays, weather and breakdowns happen consistently so don’t let those kind of inconveniences cause you to miss your cruise. Getting in a day early will give you plenty of time to get past any travel delays you encounter with the added bonus of beginning your vacation a day earlier!

How to choose a cruise ship

Royal Caribbean has many cruise ships that vary in size, offerings, and things to do onboard.

While Royal Caribbean’s ships tend to be big, there is enough variation among the different classes of ships to offer everyone a good choice.

These ships are not just built to be big, rather, they are built to be large enough to house all the really cool adventures that await you.  Looking back to our first way Royal Caribbean differentiates itself, all those innovative activities need to go somewhere and so Royal Caribbean has built its ships bigger and bigger to offer more and more to its guests.

Despite their size, Royal Caribbean designed these ships to be easy to get around. Each of the Oasis class ships has 7 distinct neighborhoods that have their own look and feel. The neighborhood concept makes getting around easier because areas of the ship do not blend into each other.

In fact, first timer cruisers might find the largest and newest Royal Caribbean ships to be an ideal pick because they offer the latest innovations, entertainment, technology and choices.

Perhaps you live somewhere where getting to an Oasis class ship is not practical or feasible, or you generally prefer smaller ships. There are lots of other great ships in the fleet to consider.

Radiance and Vision class ships make up the smallest ships in the fleet, but what they lack in size, they make up for in port variety, great value and beauty onboard.

To paraphrase the Jedi Master Yoda, judge not these ships by their size. While they may lack surf simulators and bumper cars, they make up for in classic cruise experience. These smaller ships can get to ports of call that larger ships cannot, as well as offer a more intimate experience in relationship with your fellow guests. Not to mention, these smaller ships also come with a lower price tag! There is absolutely nothing wrong with these ships, but it is worth understanding what these ships offer (and do not offer) onboard when picking the right ship for you.

In terms of those that are new to cruising, I recommend an Oasis- or Quantum-class cruise ship because they offer the most options and seem to match up well with what first time cruisers expect on a cruise ship.  Even if you have never taken a cruise before, these two classes of ships offer the kind of impressive features that many first timers read about being on the latest cruise ships.

Some of the best value these days are in the recently amplified ships that received major new upgrades, but still retain a lower average price than newer ships in the fleet. Mariner of the Seas, Navigator of the Seas, Oasis of the Seas and more that have gotten work done since the Royal Amplified program began in 2018 are excellent choices as well.

Many people ask me what is the worst Royal Caribbean cruise ship, but the reality is every ship has its merits, so it is really a question of what do you want the ship to have onboard, and does the ship you are considering have that.

Which cabin to book

Which room type is right for you is another major consideration in picking the right cruise.

There are four basic types of cruise cabins:

Royal Caribbean prices its cabins based on double occupancy, which means even if you want to sail alone, you’re going to end up paying double.

Refundable cruise fare will cost more, but allow you to get a full cash refund if you decide to cancel or change plans before the final payment date.

Non-refundable cruise fare will save money on the total cost, but there is a change fee if you cancel or swap to a different sailing.

I recommend booking refundable cruise fare for peace of mind in case you change your mind later on, even if it will cost you more compared to non-refundable fares.

More than likely which cabin you want to book will depend on your budget, how many people are traveling with you, and personal preferences.

Balcony rooms are the most popular category, with Royal Caribbean dedicating more cabins to balcony rooms than in the past.