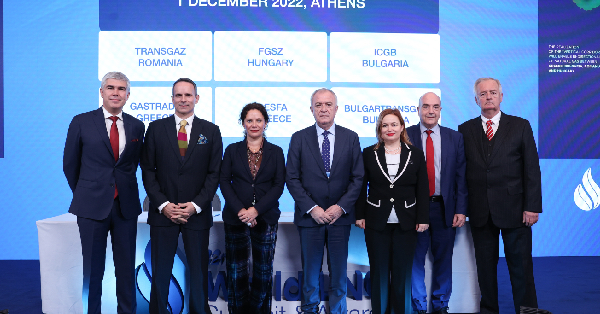 A Memorandum of Understanding (MoU) was signed today between DESFA (Greece), Bulgartransgaz (Bulgaria), Transgaz (Romania), FGSZ (Hungary), ICGB (Bulgaria) and Gastrade (Greece) with the purpose of their mutual cooperation for the realization of the Vertical Corridor, which will enable bi-directional flows of natural gas from North to South and from South to North.

The signing of the MoU took place in the context of the 22nd World LNG Summit, organized in Athens hosted by DESFA, under the auspices of the Ministry of Environment and Energy from November 29 to December 2, 2022.

By signing the MoU, the companies affirmed their commitment – both jointly and individually – to the development of the necessary projects for the implementation of the Vertical Corridor. The MoU will be valid for three years with the possibility of extension for another year. It is noted that the agreement builds upon the Memorandum of Understanding/Joint Statement signed by the Ministers of Energy of Greece, Bulgaria, Romania, and Hungary for the development of the natural gas “Vertical Corridor” at the CESEC meeting held in Budapest on 8th September 2016.

The cooperation framework defined by the MoU foresees that the companies will explore the technical specifications of new connections, pipelines, interconnections or reinforcements of the existing networks and develop the planned projects in the region taking into account the EU’s energy strategies and policies, as well as the relevant developments in the regional gas market. Furthermore, the companies agreed that the Memorandum in question will form the basis of intensive cooperation in the future, in terms of the possibility of building the necessary infrastructure for the transport of natural gas to the transit countries and to the EU market from Greece through Bulgaria, Romania to Hungary and vice versa.

The companies further agreed to invest reasonable efforts to achieve a non-exclusive long-term partnership for the development of the natural gas systems of the four countries and to initiate discussion on regulatory and economic aspects for the implementation of the Vertical Corridor. Finally, the companies agreed to seek, where appropriate and relevant, the facilitation and guidance of the European Commission

DESFA CEO, Maria Rita Galli, stated: “The MoU signed today is an important step towards the implementation of the Vertical Corridor, a project that will significantly contribute to the supply security of the wider region and will further strengthen the role of Greece and the region of SE Europe in the energy map. Reflecting on the current energy landscape, the geographical positions of the four countries and specifically Greece strategic role as a gas entry for LNG imports, we fully share the commitment to coordinate the actions of the infrastructure operators of the region for the establishment of flexible regional gas systems and interconnections, towards the target of a single European market.”

Bulgartransgaz Executive Director, Vladimir Malinov, commented: “Our common actions are important not only to the EU member states, but also to the Contracting Parties to the Energy Community. Bulgartransgaz EAD’s projects, currently underway – the expansion of the underground gas storage facility Chiren and the Interconnection Bulgaria – Serbia, are of paramount importance to achieve the objectives of the Memorandum, Mr. Malinov emphasized. Together with the planned projects for the increase of gas transmission capacities from Greece to Bulgaria and from Bulgaria to Romania and North Macedonia, they will ensure additional diversification of the natural gas supplies for the country and the region, will guarantee the energy supply and will boost the competition”.

Ion Sterian, Director General of SNTGN TRANSGAZ SA stated: “Transgaz has been a constant, vocal and solid supporter of the Vertical Corridor. We have proven this by honoring our commitments and cultivating the spirit of dialogue. At the same time, Transgaz has always believed in the synergy of the Technical System Operators of Greece, Bulgaria, Romania, Hungary, which can jointly create a significant impact in enhancing the energy security of not only the countries of origin of each of the TSOs, but also of the region and even of the European Union. A coordinated development of these countries’ systems, as well as a coordinated development of the interconnection capacities, can transform the region and Europe in terms of gas supply security and enable us to become a pole of economic development for Europe.”

János Fehér, member of the Board of Directors of FGSZ, stated: “The ministerial decision and commitment on the realization of the Vertical Corridor back in 2016 in Budapest has reached a new level with the signature of the Memorandum of Understanding today. FGSZ has been working on the Hungarian elements of the project since then, the already realized capacity increase at the Romania-Hungary interconnection point is also part of it. FGSZ continues to work further on the planned elements of the Vertical Corridor that will increase the possibilities to reaching alternative sources and enhancing security of supply in our region, at a time when Europe needs it even more than ever.”

ICGB Executive Officers Teodora Georgieva and George Satlas emphasized the need for close cooperation between the countries of the region to improve energy connectivity and secure more sources of gas supplies. “In the context of the changed energy and security environment in the region, cooperation on the development and construction of new energy projects to guarantee diversified sources of gas becomes a top priority. We recognize the serious efforts that are being made at the national and European level in terms of improving energy connectivity and achieving energy independence through diversification” said Georgieva and Satlas during the event. They highlighted the opportunities for development of the Vertical Gas Corridor after the successful commissioning of the gas interconnector, contributing to energy security and sustainability within the region. According to them, the role of IGB in this aspect will be even more significant when the total capacity of the pipeline increases. “Currently, the interconnector Greece – Bulgaria has a maximum total capacity of 3 billion cubic meters per year. In coordination with DESFA, we have the opportunity to increase this capacity up to 5 billion cubic meters per year, which should happen in sync with the commissioning of the LNG terminal at the Greek city of Alexandroupolis, expected in 2024,” said the two ICGB Executive Officers.

The Managing Director of Gastrade Kostis Sifnaios stated: “Gastrade is happy to be part of this important initiative. We look forward to working together with our partners in accelerating the integration of our markets and enabling our system users to enjoy a seamless gas transportation corridor. The development and enhancement of the Vertical Corridor will ensure more optionality, greater liquidity and will strengthen the security of affordable energy supply.”