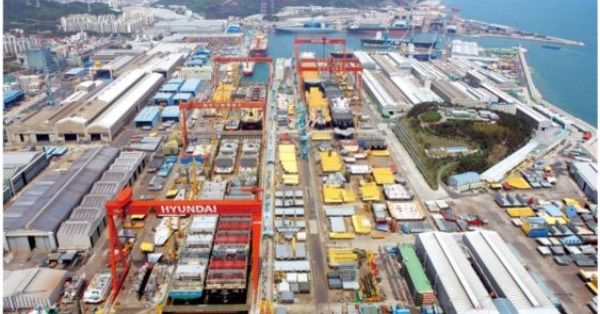 Unionized workers at the three shipbuilders of Hyundai Heavy Industries Group  declared a strike on Nov. 30. According to them, four- and seven-hour strikes at the three companies are scheduled for Dec. 6 and 7 before an indefinite general strike to start on Dec. 13.

This is the first joint strike of the three. The employers recently proposed a base pay increase of 80,000 won and a bonus of three million won for next year, and then the unions opted to go on strike to demand more. “Accepting 100 percent of the workers’ demands will increase the annual cost of the three companies by no less than 250 billion won,” the employers said.

In Daewoo Shipbuilding & Marine Engineering, unionized workers staged a strike for four hours on Nov. 21, seven on Nov. 28 and four on Nov. 29. Approximately 9,700 workers are unionized in this company, including 4,800 or so who are Korean Metal Workers’ Union members.

The workers’ demands include a base pay increase of 6.4 percent, special bonuses and incentives, and later retirement. For reference, the company’s operating loss amounted to 627.8 billion won in the third quarter alone.